Spanish Civil War Campaign Turn 4 - If You Go Down Into The Woods Today...

Campaign Turn 4 turned out to have some interesting manoeuvring by both sides, some of which caught me by surprise, but then that's the fun of running a campaign. In broad terms, as can be seen below, the Nationalists focused their attacks North of the ridge to try and eliminate the isolated British International Brigade. To the South, the Republicans launched a spoiling attack against the Italian CTV forces before they could build up their strength.
With two battles to be fought, I chose to play the 'easier' of the two from my perspective, that of the attack against the British International Brigade. The situation can be seen in the following image:

Nationalist's Plan of Attack
Having set the table up based upon the map above, I sent images and info to Jon who then sent me back the following: 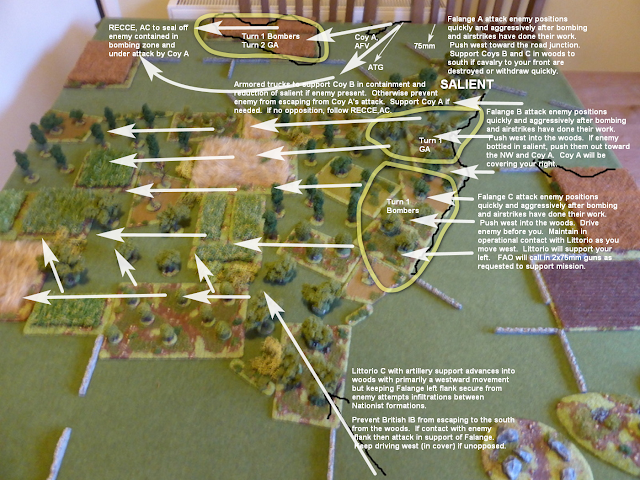 Republican Plan of a Fighting Withdrawal
I did the same for Norm, whose plan was survive first contact and do a 'Benghazi Handicap' style withdrawal as shown on the image below: 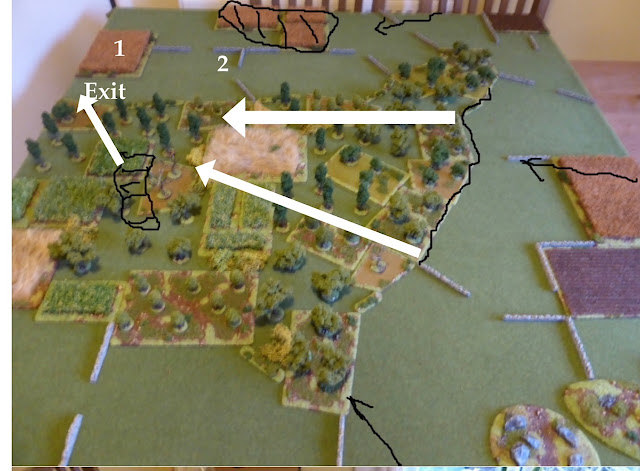 Overview of the Battlefield
So with the plans in, the troops were deployed as ordered and can be seen below:

The Action Begins
As before, I'll allow the annotated images to tell the story of how the game unfolded:

End of Game
With the British almost down to the last man, the CO had not option but to surrender, as his troops were effectively hors de combat.
The Butcher's Bill
Littorio 'C' Coy - 2 x Infantry
Falange 'B' Coy - 1 x Infantry, 1 x MG
British - 2 x Infantry, 2 x MG, 1 x Mortar, 1 x Artillery, 1 x Cavalry.
British Surrendered - 1 x CO, 2 x HQ, 3 x Infantry
British Escaped - 1 x HQ, 2 x Cavalry, 1 x Artillery, 2 x Armoured Cars
Post Game Thoughts
Well that was an interesting game, with some twists and turns right from the off. Certainly not the sort of scenario one would expect to play, but then this is the joy of playing a campaign as it throws up interesting challenges such as this one. So as always a few thoughts on the game in no particular order:
In campaign terms this has some intriguing outcomes. The Nationalists are certainly in control of the area North of the ridgeline, but they cannot afford to ignore the potential threat, albeit slight, from the remnants of the British units that fled North off the battlefield. With a large spoiling attack happening at the same time to the South, where the weight of the Republican forces are, the outcome of that may have an even larger effect upon the campaign than this victory. We will have to wait and see how that plays out but hopefully it will not be too long before we know the outcome.
Until then stay safe and keep healthy.
Posted by Steve J. at 08:49