Another game made it to the table a day or so ago, from the on going Spanish Civil War campaign that I'm running with Norm and Jon. Until a map is 'released' in a day or two, the situation is broadly that the British III Coy has been ordered to perform a delaying action against elements of the Falange Battalion. OOB and orders from both players can be seen below:
British International Brigade III Coy OOB
1 x HQ
3 x Infantry
1 x HQ
1 x Recce Armoured Car
Orders
Broadly - I would like my company to occupy the frontage of the woods to the right of the road (only - nothing to the left) …. So that they have an easier / shorter path of escape, which they should do before they get compromised. If possible, can the armoured car deploy out on my right, preferably in cover, so that it can give protection to my path of retreat and then retreat itself once threatened with something that can do it real harm. I think Jonathan will be manoeuvring early to cut my retreat path, likely with mobile forces, so I see this episode as one of potential high risk for my III Coy.
Falange  OOB
1 x CO
'A' Coy
1 x HQ
1 x Recce
3 x Infantry
1 x MG
1 x Pak 35/36 + tow
1 x 75mm Artillery Support Unit + tow
2 x Armoured Trucks
1 x Armoured Car with AT
1 x Schneider Tank
'C' Coy
1 x HQ
3 x Infantry
1 x MG
Orders
See image below (note that the III Coy are expected to be deploy in the woods as shown by the hatched oval): 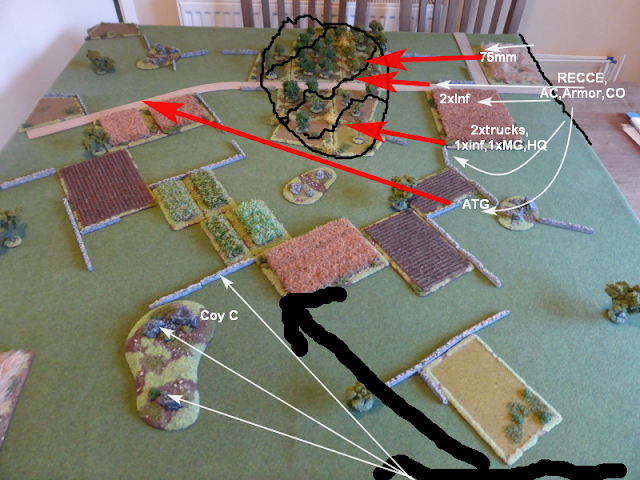 Deployment
With the orders in, the units were deployed as follows:

Let Battle Commence
The photo captions will give an idea of how the game played out.

End of Game
Suddenly the game was over almost before it had begun. The British international Brigade's armoured car unit moved off to the North West table corner and linked up with a supporting cavalry unit (odd board and relevant for the campaign).
Post Game Thoughts
Well I'm not quite sure what to say really, but I'll try and sum up my thoughts;
So now it is time to update the campaign and pass relevant info on to Jon and Norm, with Norm maybe needing a stiff drink to accompany it after such a devastating turn of events in just one Turn. Hey ho! Hopefully the Die Gods will show their favour to the Republicans in another game...
Until next time stay safe and keep healthy.

I have been running a Spanish Civil War campaign that kicked off a few weeks ago, ably abetted by Jon Freitag and Norm Smith, who kindly volunteered to take command of the forces involved. Jon  was good enough to take on the role of the Nationalist troops  leaving Norm in charge of the Republicans. My part was to handle campaign movement and then implement their plans when a battle was fought on the games table. But more of that in another post.
Last week  we reached the point that a battle needed to be resolved on the games table. I set the table up, briefed both players and then awaited their orders, which are as follows:
British International Brigade 1st Coy Orders
Overall strategy will be to stay out of the way of the opening barrage, then move into defensive positions and once attack looks to be gaining momentum …. Bug out at speed and abandon my superb defensive position!
Specifically:
1. Do not physically defend the right ridge (right of road)
2. Deploy 1 x 75mm on the road between the ridges with open sights down the road to harass enemy infantry, impeded motorised infantry and destroy vehicles. Retire if compromised.
3. Deploy 81mm mortar on far left of left ridge, just inside the wood line. Attack targets of opportunity or lay smoke if my retreat is looking perilous! It will be the last unit to bug out!
4, Deploy  FOO alone on the RIGHT ridge in cover, but best views. Call fire for maximum damage, so likely at soft targets.
5. EVERYTHING ELSE CO / HQ / 3 x inf / 1 x MG to be placed BEHIND the left ridge (left of road), but more towards its left side and with a shorter distance to retreat off table. I think Jonathan will be pushing here anyway.
Once the initial barrage is over (if there is one), they will rush up the hill to take cover in the woods, they will hold off the enemy as long as possible, but preservation of force is a priority, so as soon as Jonathan gathers momentum and looks like he will steam-roller me, I will abandon the position and retire from the table.
CTV 'Fiamme Negre' Blackshirt Battalion Orders
Deployment
With orders in I then tried to deploy the troops as per their orders. Any mistakes are mine alone and can be attributed to the confusion inherent in such things (well that's my excuse!).

The Action
The annotated photos will hopefully give an idea of how the game played out.


The Butcher's Bill
The Italians lost two infantry units, but managed to capture the British artillery support unit at the end of the game. The British only lost one infantry unit but the loss of the artillery unit is quite significant in campaign turns.
Post Game Thoughts
As always a few thoughts on the game itself and maybe on the campaign implications. So in no particular order:
The campaign has moved on since this game and another one is in the offing, that should be rather interesting. First I need to upload the campaign map so that these battles make sense. I haven't done this so far as to maintain a certain level of 'fog-of-war' for both players, but more on that later.
The Russian Civil War is continuing to pique my interest and is certainly a fascinating conflict to try and game with BKCII. I have some ideas and may try them out soon, but first I need to figure out a small order to Pendraken as well as keep focus on this campaign. But first the weather is glorious here so I'm off for a nice walk to ponder my options on the RCW front!
So stay safe and keep healthy! Until next time.