Deployment
With orders received, I set about deploying both sides as can be seen below. I used my wooden blocks for the game and not only do I find them fun to play with, but they make the action a lot easier to follow, due to my limited photography skills and if using my Commission Figurines figures.

Turn 2
The Ruthenians won the movement initiative and elected to let the Moravians move first. They also won the fire initiative.


The End of the Game
Well that was very quick and a much more decisive victory than I would ever have thought, possible, looking at the forces involved and how the scenario was set up. I thought it would be tough one for the Ruthenian's, but 'twas not to be.

Post Game Thoughts
After a bit of a break, it was good to be back on the games table using Honours of War and my wooden blocks. Despite it being a very quick and one-sided game, I enjoyed it and thanks once again to Dave and Keith for their help with the scenario. So as always some thoughts in no particular order:
Next up is the second game in my narrative 'Rebels & Patriots' campaign, which should get played in the next day or two, all being well. Fingers crossed things are beginning to move in the right direction here in the UK, so maybe it won't be too long before we can meet up with friends, albeit outside, which will be nice. I think it's about 5 months since I've seen anyone! Face-to-face gaming might be some time off, but at least there's light at then end of the tunnel.
So until next time stay safe!

With the campaign broadly set up, it was fairly easy to set up the first game, using the campaign narrative as a guide:
Background
Major Molotov was on his third raid into Ruthenian territory, this time having pillaged the cherry orchards of one Anton Chekov. Unbeknown to Molotov, Chekov had managed to get word to Rittmeister Radetsky that his orchards were under attack. Radetsky swiftly assembled some of his troops and aimed to catch the Moravians on their way back across the border.
Scenario J: A Long Way From Home
I chose the above scenario from the rulebook, as it seemed a good way to start the campaign, with the only change being to use 'Dawns & Departures' to generate the terrain, which can be seen below on the map. The NE and SW squares contain cherry orchards, the NW square a small hill and the SE square ploughed fields or crops.

Ruthenian OOB - 18 pts
4 x Line Infantry
1 x Jaegers
Moravian OOB - 24 pts
3 x Line Infantry
1 x Light Infantry
1 x Jaegers
1 x Hussars
The Plans
For Rittmeister Radetsky, the plan was simple, in that it was to advance as quickly as possible towards the orchards in the NE corner and to try to form a cohesive defensive line there. For Major Molotov, his plan, if you can call it that as he was unware of the impending ambush, was to quit Ruthenian territory as quickly as possible, using his Hussars and Jaegers to cover his flanks.
The Game

End of Game
With Major Molotov suddenly fleeing, another unit failed its morale test and became disordered, at which point it was pretty obvious that the remaining Moravian troops had little to no chance of breaking through the Ruthenian lines.
Post Game Thoughts
Well, that was over much more quickly than anticipated! Still it felt longer and was a fun and entertaining game, more so due to it being part of a campaign. So first of some thoughts on the game:
In terms of the campaign, we have:
Rittmeister Radetsky now on 19 Honour.
Major Molotov still on 10 Honour.
I have some idea for the next campaign game, which will move one rung down the ladder, as the Moravian troops were unable to cross the border into their own territory, but more on that in the next post.
I have another game lined up with my friends giving me remote orders, using Neil Thomas' OHW scenarios, as per previous games. Honours of War will be the rules again and I'm looking forward to getting this onto the table. My painting mojo is low as I'm preferring to play games at present, but this might change.
I recently tweaked the layout of my Blog pages, which has allowed me to post larger images, but frankly it has been a pain to format this post😣. For some reason it decided to play silly buggers as a I was writing, which took me over half an hour to correct, with lots of Anglo-Saxon expletives along the way! Hopefully it was worth it and makes it easier to see the action in the accompanying photos, but any feedback would be greatly appreciated.
So until next time stay safe and keep healthy!

After a break of over a month doing some of my other hobbies and enjoying at times some wonderful Springlike weather, it's now time to get back to some wargaming. I've had several ideas for campaigns and games bubbling away and I've been working on them, even whilst away from the games table.
Out of the ideas I chose to bring forward a simple Rebels & Patriots campaign, that I've been meaning to do for quite some time. Now I have some books on how to set up campaigns as well as the Two Fat Lardies 'Dawns & Departures' pdf for use with 'Sharpe Practice II'. So a day or so ago I dug out the latter and after a quick perusal, I had created a simple ladder campaign that can be seen below: 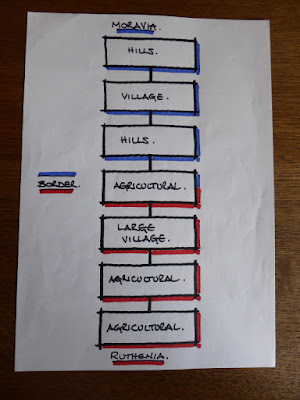 The 'Dawns & Departures' pdf has lots of great ideas within it and if you want, you can go into an awful lot of detail in setting up your campaign and running it. However I wanted something more simple and so opted for a ladder style campaign, as this would be easier for me to run solo using the 'Rebels & Patriots' rules. Despite it's simplicity, there is a lot more to it given the way the terrain is generated, so each game in each square is never the same, which is good. Also I will be using my usual narrative approach to drive things and see where it takes me. Simples!
Background Fluff
Incursions are a constant problem along the Ruthenian - Moravian border. Lately the Moravians have been making raids to steal the famous Ruthenian cherries, to flavour their vodkas, which has somewhat miffed the Ruthenians, who love nothing better than a glace cherry tart for their pudding. With the stakes so high, both sides have upped the ante and dispatched their best commanders to the border...
Commanders
I rolled for the Officer's traits as per the rulebook and came up with the following, which helped create the narrative for the campaign;
Ruthenian Rittmeister Radetsky (Battle Scar +5 Honour)
An experienced officer, he has been somewhat overlooked for promotion, either due to lack of the right family connections, or possibly due to some faux pas at the Grand-Duke's Valentine's Day Ball. However he is too good an officer for the Ruthenian's to ignore, so has been quietly sent to the border to deal with the cherry rustling that is causing concern at court.
Moravian Major Molotov (Officer's unit may re-roll one failed hit per Turn)
As the Quarter Masters brother, he is ideally placed to gain such materiel as required for the incursions into Ruthenian territory, leading to several successful raids and good hauls of cherries. Both brothers benefit from this as their cherry cocktails are famous throughout Moravia, even enjoyed as breakfast by the Margrave himself.
Scenario
This has already been chosen and is almost ready to go, but more of which in another post. Until then stay safe and I hope you enjoy the campaign.
Posted by Steve J. at 06:56 14 comments:

I'm not sure when I first became interested in gaming the Greco-Italian War 1940-41, but it was around the time we were looking to put on a demo game of BKCII at Colours quite a few years ago. We also considered the Italian limited invasion of France 1940, which is probably even more obscure. In the end we settled upon the Italian CTV's involvement in the Spanish Civil War.
Over the years since I have done the odd game now and then, pitting the Italians against the Greeks and the British Commonwealth troops, but a lack of suitable books on the subject has limited scope to create a decent stab at a campaign. Most books seem to focus on the German involvement in 1941, with the first part of the conflict largely ignored. Mario Cervi's superb 'The Hollow Legions' is an exception, but lacks the sort of detail a gamers needs.
Fortunately Osprey have published the first half of the conflict as part of their Campaign series early this year. I had debated on whether to buy this or not, but the author's previous works on the Italian Army I found to be excellent alongside a desire to run a campaign based upon this conflict tipped my hand and a copy duly arrived a few days ago.


From a first read through I'm very impressed by this book, as it gives an awful lot more detail than you can readily find online. It is exactly the sort of detail I have been after for quite sometime and is perfect to allow me to create my own mini-campaign based around this conflict, but more on that in another post.  In no particular order the following have been useful and of interest:
Overall a very good Osprey book and well worth getting if you have any interest in the Campaign whatsoever. I may even get the companion volume when it comes out if it's by the same author, even though I don't have that much interest in the second part of the Campaign when the Germans became involved. However it could prove useful to carry on my planned campaign but with German and Commonwealth support. Plenty to think upon for sure.
In the meantime I have some painting to do, which I've neglected of late as some Spring like weather and lack of motivation has meant the brushes have stayed firmly in the drawer. Sadly we have some new cases of the Brazilian Variant of Covid-19 in Bristol that has mutated to a point that's worrying the Boffins. Given we had a Bristol Variant near us recently we are watching the News for updates and hope it doesn't spread down towards us. So until next time stay safe!
Posted by Steve J. at 03:58 10 comments: