I have struggled over the past couple of weeks to find the motivation to get back to the games table, despite an AVBCW campaign all ready to go and some Rebels & Patriots games sketched out. A combination of factors are to blame I'm sure, but aside from the obvious Covid-19 lockdown impact on life, nothing really springs to mind as to why. So in an attempt to get my butt into gear again, I thought I'd take some pics of what I have been up to see if that will get things moving. So in no particular order:
Aircraft Hangar
I added the foliage and flock last week, as this will form the part of the final scenario for my planned AVBCW campaign. I'm really happy with how it had turned out. As with all things I could have spent a lot longer on adding details and painting, but for the amount it will get used, it is just what I wanted. 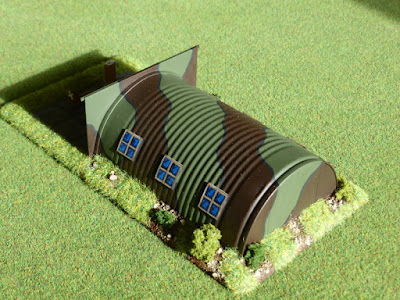 Flags
I've put of making proper flags for my units for far too many years, thinking that they would be difficult to do. Given my previous career I don't know why I worried so much, maybe it was seeing so many nice examples in magazines, on Blogs etc. Anyway, I finally got my act together and the results can be seen below. I used the excellent Warflag website and downloaded and rescaled the flags to fit the banner poles. As they are slightly different lengths you have to tweak the images to suit. I glued these to the banner poles with pva glue and then left them to set before painting in situ. I want to try painting some flat as it is easier doing the details and then gluing them to the poles, but want to make sure the paint doesn't crack or cause problems animating the flags.

Paints
As my painting mojo is slowly returning, I needed to top up my paints as some of my most used colours were getting rather low. Years ago I bought the GW boxed paint set and it has stood me in very good stead ever since, so it was simply a case of finding out what the new colours were called and making sure they were as close as possible to the originals. Fortunately there are plenty of website that can give you that information. So after a bit of faffing on the GW website, my order was placed and arrived in less than a week.
Books
Well my intention of limiting the rules I play and/or buy failed somewhat, as I bought two within a few weeks of each other! As mentioned before, I'm looking at rules for the Pike & Shot era and have been considering 'Beneath the Lily Banners' by Barry Hilton on and off for some time. Some excellent AARs and posts on various Blogs finally tipped me over the edge, ditto on the Neil Thomas' rules.

Painting
With my painting mojo returning, albeit slowly, I've set myself the goal of trying to paint an 19thC Imagi-Nations Brigade to fight against the ones earlier in this post. Again they are from Pendraken's AWI range, but this time British and German allies. With Pendraken having their painting competition this month, it might inspire me to finish them sooner rather than later.
General Wargaming
Despite my lack of gaming activity, I have continued to enjoy reading various Blogs and the posts contained therein. It has given me that wargaming fix that has been lacking of late, which is nice and good for morale. Things are looking up and even writing this post has bouyed my spirits somewhat! So with luck I might have some AARs etc to post in the next week or so, fingers crossed. Until next time stay safeand keep Blogging!
Posted by Steve J. at 07:16