After a year or two away, those nice chaps at Pendraken are running another Pendraken Painting Competition with some rather nice prizes on offer as always. The standard is always incredibly high with some very talented painters and modellers out there. As is the way of things I had planned on painting some units up that needed doing anyway, but failed completely! However I had some armour from the past 12 months that would just about pass muster, so some quick shots were taken this evening in the vain hope I might get close to a prize.
All the miniatures are from Pendraken's WWII and are naturally 10mm. So without further ado: 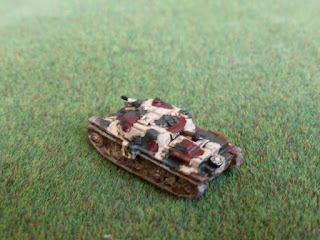 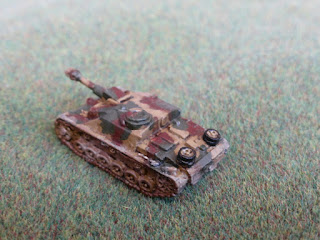 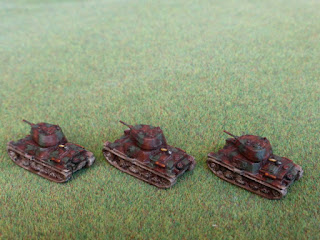 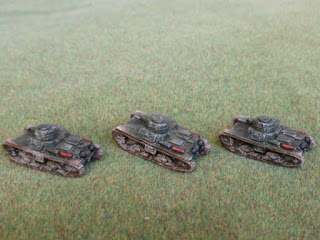 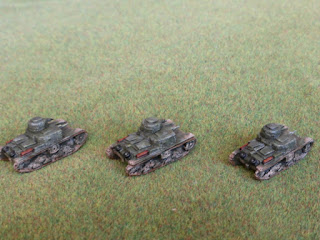 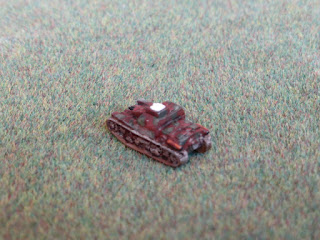 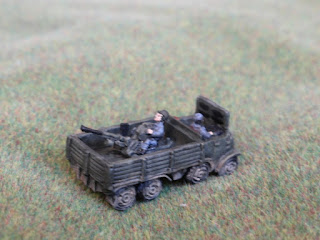 The preponderance of Italian kit is for a planned campaign, more of which in another post, as well as an ongoing fascination with the Sicilian Campaign and the Invasion of Mainland Italy. More updates on 'stuff' soon, but I'd better submit my photos before it's too late!
Posted by Steve J. at 10:21 16 comments:

As mentioned in a previous post, a recent game set in the Bristol 'bocage' prompted a Pendraken forum member to comment that this sounded like the name of a British Inter-War aeroplane. This set the old grey cells a whirring and after a bit of thought, I decided to somehow convert a suitable model into something with the right 'look'. So after quite a bit of searching I settled upon the German WWI 'heavy bomber' AEG G IV kit from Red Eagle Miniatures as the basis for my design.
A delay caused by Covid meant that there was a delay in receiving my order, which in the grand scheme of things is no big deal, but last week the kit finally arrived. The model itself is really rather nice but like all kits for this period, the big issue is getting the struts to fit, which even for a former pro-modelmaker such as myself, is a challenge. I had no plan on how I wanted the plane to look like, so simply settled upon assembling it in stages, making decisions as I went along.
The final result can be seen below. In the end all I did realy was to alter the wing and tail ends as well as the rather obvious monoplane design, to give it a developmental look common to many Inter-War designs. This was largely as a result of it being damned tricky to get the struts to fit, as I had planned on keeping it a bi-plane design. I actually loved the look of it with the engines mounted above the wing, so I simply added some additional supports to tie them to the wing itself, which I think looks rather nice.

The next major decision is what camouflage scheme to give it as well as what markings to use. At this period the British bombers were rather dull with a dark green top and black undersides as they were intended for night time operations. I will have a trawl through my old Airfix magazines as they have a whole host of superb articles on aeroplanes of this period, to see if anything a little different was used.
As for other gaming related activities, things are beginning to look up as as the weather is improving and warming up (famous last words!) so I am able to enjoy my other hobbies, so i'm enjoying my 'wargaming time' much more, rather than that being the only show in town. More updates to follow soon, all being well. So until next time, stay safe!
Posted by Steve J. at 01:57 13 comments:

After a lovely early morning walk in some very crisp Winter sunshine with barely a soul about (too cold for the dog walkers!) I settled down to some games of Rebels & Patriots as planned. Not having played for a while I had a trial game in the morning to re-acquaint myself with the rules, then soon followed up with the planned one. I re-used the board from yesterdays HoW game and kept the same units, but transfered them to stats suitable for R&P.
In terms of the game, again I kept things simple, going for another Encounter type scenario. So without further ado, the captioned photos will hopefully give you an idea of how things panned out.


End of the Game
With the losses in Turn 6 and no commander, it was game over for the Prusskians, who fled the field of battle.
Post Game Thoughts
That was a nice little game and played out very quickly and smoothly, which was nice. Having played a warm up game really helped as the game proper worked much better for it. So a few thoughts as always;
I have some partially formed ideas about playing a narrative campaign with these rules, but need to flesh them out a bit. Combining them with Honours of War for bigger games could be fun to do, but again I need to think about this more and see how it might work. As always lots to think about as well as painting that I really should be getting on with. So until next time stay safe!
Posted by Steve J. at 10:15 10 comments:

Bumping Into The Enemy

After my post of yesterday helped break my wargaming ennui, I set up a very simple Encounter type action on my 2' x 2' board, with 'Honours of War' as the rules of choice for 18thC gaming. I decided to use my recently re-flagged AWI Imagi-Nations units rather than the MDF figures, just to give them a run out on the table and to inspire me to paint up the British opponents for them.
As before, I used the Austrian stats from HoW and made the Generals Dependable. I wanted to keep things pretty simple for my first game in a while, just to get back into the swing of things. Both sides had identical forces, again to keep it simple and would deploy from column of march. The objective would be simply to defeat the enemy force.
Deployment
Both sides would arrive via a corner on the road, with the lead units about a full move onto the table. The forces of Prusskia would arrive via the top table corner, those of Ruthenia via the bottom one.

End Game
As both sides began to settle down to exchange fire, the Ruthenian Line infantry managed to get an Admirable command roll and so were able to close up with the Prusskian lines. Crucially the Ruthenians won the Shooting Initiative, which stood them in good stead, as they were able to Rout two Prusskian Line Infantry and just avoided the same happening to their own troops.

End of Game
At this point the Prusskians, having lost two Line Infantry units and their Cavalry, were in no position to hold off the Ruthenians, who were too battered to be able to offer up a pursuit.
Post Game Thoughts
Well that was just the right sort of game to get me back into the swing of things and I really enjoyed myself. As always a few thoughts on how the game went etc:

Having used Honours of War, I fancy trying the same table, scenario and forces but with Rebels & Patriots. Hopefully time will permit in the next few days and I certainly am up for the game. So until next time keep safe!