Inspiration for a game can come from unlikely sources, a case in point being a post on the horseandmusketgaming Blog about some of the 'old school' authors. Having acquired quite a few of the titles I missed out on as a kid over the past few years, I dug some books out by Grant, Featherstone and Wesencraft for a general and pleasurable perusal one afternoon. I wasn't looking for anything in particular but I was struck by a scenario in Grant's 'The War Game' that I thought would make for a nice little game with my mdf figures.

Black Powder II would be the rules of choice this time around, but the scenario is begging to be played with Honours of War and my wooden blocks at some point in the future. As of late the amendments from the Glory Hallelujah! supplement would be used, as I find this give a good game. Rather than a straight re-fight with the forces listed in the original scenario, I thought I would make one side slightly stronger, but use the 'Untested' rule from BPII to give some uncertainty to how good or bad the troops would be. I wasn't sure how well it would work but was keen to give it a try.
Red OOB
4 x Line Infantry
1 x Light Infantry
1 x Artillery
1 x Cavalry
Blue OOB
6 x Line Infantry
2 x Light Infantry
1 x Artillery
2 x Cavalry
(All Blue units apart from the Artillery would be classed as Untested)
Scenario
Both sides represent Advanced Guards and the objective is to control the crossroads by the end of Turn 8.
Layout
The table was set up as best as I could, with the terrain to hand and of course the map as a guide. I added in a few hedges and fields to help the look of the game as well as providing cover here and there.

Turn 1
Red won the die roll and chose to go first, moving both flanks forward, still in column of march with only the light infantry deploying into line on the right flank.
The Blue centre and right flank pushed forward and deployed into line, whilst the left flank stayed in column and moved towards the farmhouse, with the light infantry in the lead. Only the right flank was able to shoot, causing hits and disruption on the Red left flank.

Turn 2
The Red flanks deploy into line where possible and open fire on the Blue centre. Two units are hit, with one having a Stamina of 1. Somehow this manages to pass its morale saves and stay on the table, as does the other unit.
The Blue right flank fails its command roll, whilst the centre pushes forward and the left flank forms into line, with the light infantry managing to occupy the farmhouse. What shooting there is only manages to cause a few hits. The cavalry who were expected to follow the advance ready to exploit any gaps, blunder and decide to retire the the table edge.


Turn 4
With the Red left flank under pressure, the infantry had little option but to withdraw into the farmhouse to try and keep their position secure, with the cavalry still providing support. The right flank held their line and shooting finally saw the Blue Stamina 1 line infantry unit break.
As the Blue right flank continued to try and turn the Red left flank, elsewhere there was little movement and the cavalry failed their command roll. The shooting was across the line was pretty ineffective, except for the destruction of the Red artillery unit. 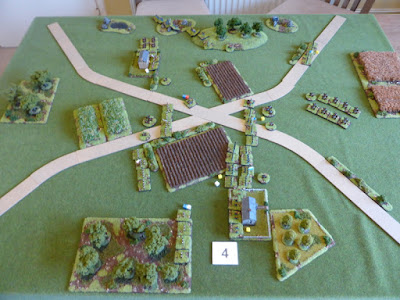 Turns 5
Having come under fire, the Red cavalry moves back out of range, but still in position to provide support to the farmhouse should it be required. No other units moved and another Turn in which the which the shooting was ineffective as the Blue units once again managed to pass many morale saves.
For Blue the right and left flanks pushed forward as the centre failed their command roll and the cavalry seeing an opportunity, moved right ournd the hill to support the right flank. The shooting managed to cause some hits and disorder, with the former beginning to stack up on some Red units.


Turn 6
The Red units held position due to most units being disordered. Their shooting managed to cause some hits and disorder, but again Blue made many morale saves.
The Blue units closed up to within close range where possible as the cavalry moved pass on the right flank, ready to charge their Red opponents. The shooting was much more effective, with combined infantry and artillery fire seeing another Red line infantry unit break and flee the table.

End of Game
With the loss of another line infantry unit, the Red position was untenable and so they quit the field of battle, leaving the Blue advanced guard in control of the crossroads.
Post Game Thoughts
In the end a rather easy vicotry for the Blue team, but early on it could easily have gone the other way. Once again BPII with the GH! supplement rules gave a great solo game and I'm really enjoying playing games with these rules. So as always some post game thoughts in no particular order:
So what next, aside from focussing on painting up the Red team for other games? I've some ideas but with our daughter hopefully back from Uni on Monday, I'm not sure how much time i will have as she has some exams to do from home. I have some ideas which I will flesh out in another post soon. Until then keep healthy and stay safe!
Posted by Steve J. at 01:06