With us now into one full month of lockdown due to the Covid-19 pandemic, progress on the wargaming front has been rather poor to say the least. Given the current situation it's not a big deal, but I had hoped to get painting and gaming in. This hasn't happened for a variety of reasons, but mainly due to the glorious weather we have been having of late alongside having to try and maintain social distancing within our household.

This aside I have at least been able to get some reading in, which is always a pleasure as well as some progress on the terrain front. Not much I admit but something I have been meaning to do for ages, especially as I need some suitable BUAs for a forthcoming ImagiNations campaign with Dave, once the lockdown is lifted.

The BUAs in question are for my Leven Miniatures Italian buildings, which I have had painted for sometime now. They are lovely sculpts and paint up rather nicely. However as with my recent ACW basing, they work better both visually and from a games point of view if they have a base to sit upon. This makes it easier to decide what counts as a BUA in a variety of rules and, should one need to, where the house is for more skirmish level games.

So a week or so ago I made a concerted effort to cut and add flock etc to some 2mm MDF bases that I had sitting around for just this purpose. I made them look rural rather than being part of a large town etc, as it fits in better with the sort of games I play. As the buildings are free standing, there is no reason I could not make more bases that would look more urban. The results of my efforts can be seen below: 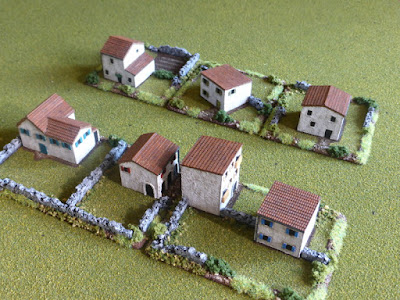 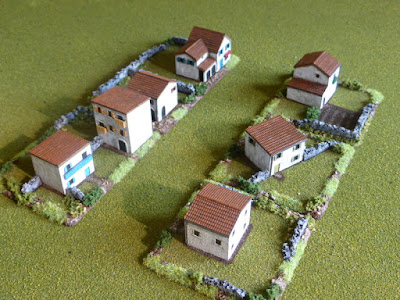 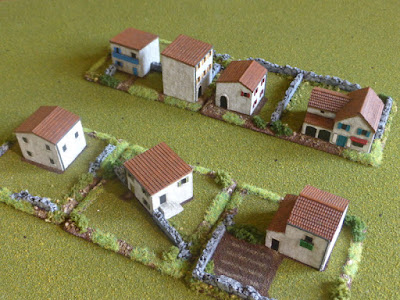 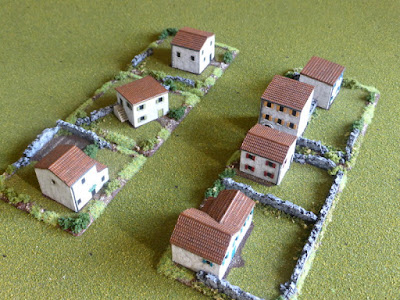 I hope to be able to get some games in with them soon, as I have some ideas for a WWII mini-campaign using Blitzkreig Commander, probably set on the Italian mainland rather than Sicily, which I gamed a lot before. This will be played out on a 2' x 2' table, as it is the easiest to set up given the current restrictions within our household.

Alongside this I have a plan to try out a variety of rulesets over different periods using the same broad scenario and table layout, so I can compare like-with-like as it were. More on this in the coming weeks with luck...
Posted by Steve J. at 01:30