The Shenandoah Valley Campaign 1862 - Into the Valley

After last week's trial game to get back into the swing of things with Black Powder, it was time to properly kick off our ACW campaign. Ours is broadly set around the famous Shenandoah Valley campaign of 1862, with our action taking place in one of the side valleys. CS Grant's 'Programmed Wargames Scenarios' would provide the action in the form of the mini-campaign contained as the back of the book.

In advance of the start, I had randomly rolled for the map of the valley as laid out in the book, as well as sending Dave his force list as given in the book. I would be taking on the roll of the Confederates, who are defending the valley and have the advantage, if you can call it that, of knowing the terrain in advance. Dave's Union troops on the other hand has little knowledge of what lay ahead, other than some rudimentary sketch maps, whose accuracy could not be attested to.

Union Army Orders
'Stonewall' Jackson is causing some problems in the Shenandoah Valley. General Rosecrans has ordered your Division to explore a side valley in an attempt to cut his lines of communication, which could lead to him being defeated in detail. It is known that the valley is defended by Confederate troops, but where and in what strength is unknown.

Mission:
To reconnoitre the valley route through the mountain range in order that the exit may be secured.

Confederate Orders
Your force is stationed at the head of the valley to give early warning of any Union troops movements. You are to send a rider back to the next position post haste, whilst your units are to remain in contact with the Union troops, but must not be outflanked.

Map Deployment
Dave was given a basic map upon which to draw out his line of march. When this was done, he was given a second map with some more information and an indication of where the Confederate troops were, but not exactly how many and of what type. 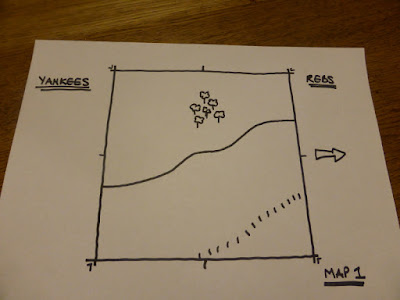 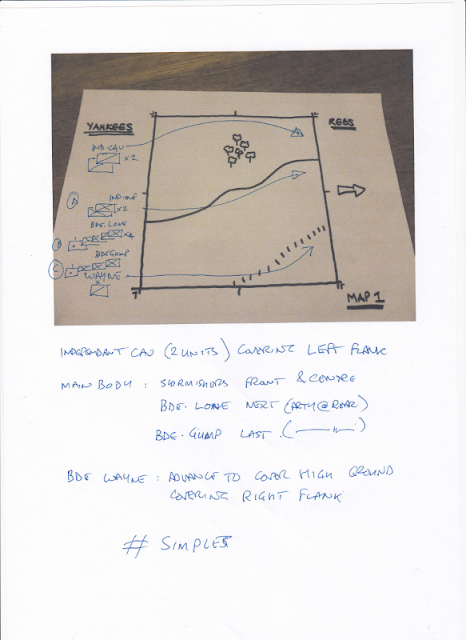 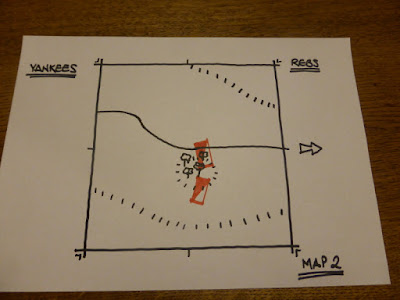 Deployment
So with all the pre-game stuff sorted, it was time to get the toys on the table and to start the campaign.


Turn 1
Colonel Wayne's cavalry came forward on the right flank and seeing Reb's on the hill, dismounted in the rocky terrain to secure the flank. On the left the Union cavalry pured forward and dismounted by the cornfield North of the Reb's position. Following on behind where the skirmishers and Brigadier Sly T'Lone's infantry Brigade.

Seeing the mass of enemy arriving, Colonel Butler ordered a rider, Sergeant Paul Revere, to be 'gone with the wind' and report on the Yankees arrival. Following his orders, he mounted his troops up and started pulling back but keeping the enemy in view.

Turn 2
Colonel Wayne is reluctant to leave the cover of the rocks, but the cavalry on the left flank push forward and shoot at the Reb's, but fail to hit them. In the middle, Brigadier Gump's Brigade arrived and moved to the left flank due to the traffic jam of troops in the centre. With such overwhelming force facing them, Colonel Butler has no option but to move back to the snake fence line to hopefully wing a few Yankees before withdrawing.

Turn 3
With the Confederate's under a lot of pressure, the Union cavalry on the left flank mounted up and moved onto the hills to threaten their line of retreat. Sadly Colonel Wayne still sat in the rocks, but the infantry continue to push forward and the skirmishers managed to get some shots on target, leading to a Confederate unit being Disordered. With fire coming from the front and movement to their flank, Butler's cavalry moved back to the relative safety of the cornfields.


Turn 4
Suddenly someone shouted "action!" and Colonel Wayne mounted up his troopers who raced forward to save the homesteaders the snake fence, ready to attack the Reb's cavalry. All the other Union troops advanced, but no one was able to shoot as they had moved too far. With the situation no longer tenable, Colonel Butler ordered his troops to retreat. When a trooper complained to him, he said "Frankly my dear I don't give a damn!"

End of Game and Off Table Movement
With that came the end of the game. Whilst we were playing, I had also been rolling to see how far Sergeant Revere managed to ride 'off table' and fortunately he had reached the next Confederate position to warn them that a sizeable Union force was on its way down the valley.

With the 'on table part' of the game over, I diced to see how far Colonel Butler could move with his Georgia Legions. Not far enough it turned out and he was 'caught' by the Union cavalry. However Dave decided not to initiate combat a this stage as he did not know what was coming and couldn't affored to possibly lose any cavalry so early on in the campaign. He decided to shadow the Rebs cavalry, which was a wise move and one I was also happy with.

In preperation for the next game, I quickly sketched out a map to give Dave an idea of what the next engagement would entail, but more of that in the next post.

Post Game Thoughts
So a funny old game where not a lot happened in the traditional sense, but was intriguing nonetheless. As always plenty of thoughts on the game and in no particular order:
Well, I think I've waffled on long enough. Next week we will have a 'proper' game, with the Union troops having to force a river crossing against an unknown number of Confederate troops. Maybe I'll call it the Battle of Fredericksburg...
Posted by Steve J. at 07:32