One of the joys of our hobby is scratch building things, whether they be terrain, buildings or vehicles. As a child I used to love the articles in the Airifx magazine where they seemingly created wonderful conversions out of a few bits of plastic etc. Maybe this is why I ended up in the design and modelmaking business.

Over the years I have had a go at making my own bomb or shell damaged buildings, originally for when I had 15mm BKC battlegroups. But other projects started and these lay by the wayside almost unforgotten. However with France 1940 beckoning later on in the Spring, it was time to re-visit my original efforts.

It was quickly obvious that my buildings were way too large but I still liked the look. So I quickly knocked up a trial piece more suitable for 10mm, just to try out some different materials. These broadly worked but they need refining. Alongside this I painted up my Pendraken shell craters that I bought at Colours last year. For around £4 they were too good to pass up and was one less thing for me to make. I gave them a simple drybrushed finish of different shades of brown and added some lacquer to the bottom of some, to represent them being filled with water. 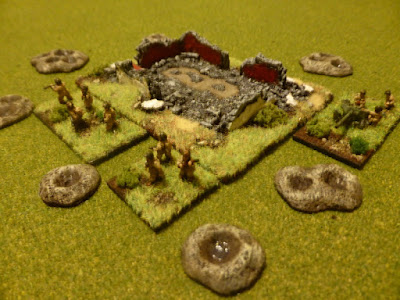 Another reason for getting the craters is that I can use them to represent damaged/rough ground to hinder movement or maybe provide some cover to troops in BKCII. Afterall the early Allied bombing in Normandy left craters so deep that they did hinter tank movement. It's something I want to try but have yet to do so, so a few trial games will be required to see if my ideas work. More on this in the future.
Posted by Steve J. at 11:03