Brexite Campaign - A Decision at Derby?

As mentioned at the end of our last game, we would have a final standard set piece battle to decide the outcome of our Brexite campaign. As this has been broadly based upon the '45, but set a year earlier, it made sense to have it happen around Derby, which historically the the Southern most point of the Jacobite advance. Based upon previous games, I came up with the following OOB, with some of the commanders rating only rolled for once they had been allocated to their relevant commands, mainly applying to the Hanoverian force.

Deployment
Having read quite a few books by Donald Featherstone, I thought it would be good to use his curtain idea, to allow both sides to deploy in ignorance of what the other was up to. My version was to deploy my troops first and then cover them up, so Dave couldn't see them as he deployed his Franco-Jacobites. This worked well, with both of us going for a fairly typical set up with infantry in the centre, supported by artillery, with cavalry and light infantry on the flanks.

My plan was to send my Light Infantry into the woods on my left flank, supported by the cavalry, as I was expecting the Jacobites to be on this flank. Fearsome in the attack, I was hoping to be able to cause some hits on them or to tempt them into an early charge from which I could withdraw from, thus dulling their offensive potential. On the right flank, the plan was to advance the cavalry to protect the flank, whilst waiting for an opportune moment to charge their French adversaries.

Dave's plan can be see below: 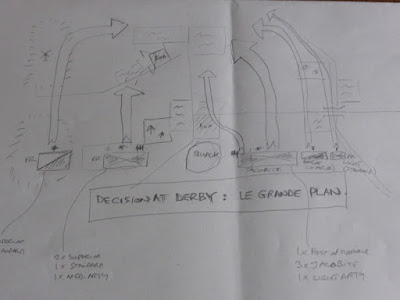 So with both sides deployed, we took some time to take stock of the situation. It very quickly became apparent that the battle would most likely be decided by who could defeat the enemy cavalry on or around the hills, thus exposing the othersides flank, from which they could threaten to roll it up.

The French and Jacobites both advanced forward, whilst the Hanoverian line held position. The Hanoverian cavalry on the left flank advanced towards the wood as the Light Infantry entered it, hoping to be able to reach the edge from which to take pot shots at the Highlanders. On the right flank, Ponsonby the Dashing commander rolld a '6' which meant he had to advance towards the enemy, which was the French cavalry. He was just short of being able contact them. There was some shooting from the artillery, with the Hanoverian medium gun taking one hit.

The Franco-Jacobites won the Initiative roll as decided to go first. Knowing Dave's propensity to roll a one at critical moments in the game, he jokingly showed me what a one was on the die, then rolled it for it to come up a one!!! This stopped his French cavalry from charging Ponsonby's horse, much to my relief. With it then being my turn, I too rolled a one, but as Ponsonby was a Dashing commander, this still allowed me to charge in. Huzzah!

Elsewhere, the French and Jacobites advanced, with the Light infantry of both sides meeting in the woods, causing one hit on each other as they exchanged fire. The artillery failed to cause any hits.

The Jacobites continue to push forward, reaching the edge of the woods, whilst the French hold position as they fear getting too close the Hanoverian medium artillery, which could be devastating when in range for giving them a whiff of shot. The Hanoverian cavalry reform and dress ranks, whilst the Light infantry in the woods fail to hit each other. The Hanoverian light artillery causes one hit on the Lowlanders.

The French light infantry failed their command roll to charge their Hanoverian counterparts, who decide with withdraw as the Jacobite Highlanders enter the woods and get too close for comfort. The French decide to withdraw slightly so as not to expose themselves to too much artillery fire as well as the threat from the Hanoverian cavalry. Once again both sides artillery are ineffective, so no action to report.

With his cavalry reformed, Ponsonby ordered another charge on the French cavalry on the hill. I another closely fought contest, Ponsonby's horse prevail, thus leaving the French flank hanging in the air.

The Jacobites do their best to advance, but the Hanoverian left flank has ample time to withdraw and dress their lines to meet the impending attack. Again both sides artillery is ineffective.


End of Game
At this point it was obvious that the French would be unable to advance without cavalry protecting their flank, as well as the fact that they were facing an intact Hanoverian line. The Jacobites although close to the Hanoverians, would most likely take quite a few casualties as they tried to get to grips with the enemy. So we decided that descretion was the better part of valour and the Franco-Jacobites with drew from the field of battle, handing campaign victory to the Hanoverians.
Post Game Thoughts
Well not quite the climatic denoument to our campaign that we were expecting, but nevertheless an interesting game upon which to finish. So some thoughts on the campaign and the game in general and as always in no particular order:

So there we have it, our Brexite campaign at an end and the Hanoverian troops still very much involved in Europe, much to the chagrin of Louis XIV. It would be nice to return to this 'period' in the future, but time to move onto another set of rules and a different period.

Our plans for the New Year are to play one of the campaigns from the aforementioned Grant book, with it set at some point in the American Civil War. We're not sure whether we will use Black Powder as the ruleset, with the Glory Hallelujah supplement amendement, or Bloody Big Battles. I need to read more on the campaign to get a better idea of which rules might be the best fit. So until next time...