I'm pleased to say that my chum Keith Flint has kindly decided to organise another Cotswold Wargaming Day this year. Details can be found on his Blog:

I and others who attended last year thought the show was a great success. The venue is great as there was plenty of room and the whole day was very relaxing and full of good natured banter. What more could you want from a games show?

This year I have volunteered to put on some games from Bob Cordery's 'The Portable Wargame' stable. Certainly there will be some mid 19thC Imagin-Nations gaming, possibly even some Napoleonics. I'm awaiting delivery of his 'Gridded Naval Battles' so there could even be some little ships to push around, which could be fun. More details will appear on my Blog in due course.

I hope to see some of you there and maybe even cross swords on the day.

Earlier in the week I set up another small Portable Wargame, nominally set in the mid 19thC. I chose a fairly simple scenario, with both sides advancing towards the objective of a small town on a main road. For this game I wanted to try the card activation system as set out in the book, plus some random force selection, using the one created by Neil Thomas in his excellent 'Wargaming 19thC Europe 1815 - 1878'. The forces created were as follows:

I allowed each force to have one Elite unit and one Poor unit, purely decided by my whims and nothing else.

With everything set up, I managed to find some time for the game whilst SWMBO was out for an hour or so in the evening. The following will hopefully give an idea of how the battle unfolded.


Well that was another highly enjoyable game, which gave plenty of interesting decisions to make as the game progressed. For the most part both sides were tied on taking hits, but once Red got the advantage on Blue, they didn't let go. So it could have gone either way which was nice.

Post Game Thoughts
My usual post match musings in no particular order:
So my next task it to put together two painted forces plus some bespoke terrain to really get things going. Given the small nature of the forces required, this shouldn't be too much of a challenge, even for a slow painter like myself. Famous last words of course!
Other things on the gaming front include setting up a small BKCII  campaign to be played with Adam as and when time allows for us to meet up. Normandy is easy to do, but I'm drawn to sicily again, purely so I can use my Italians and some of their hopelessly outdated kit. A glutton for punishment springs to mind.
I have also ordered a copy of Bob's Gridded Naval Rules which should arrive any day now. I've never really been taken with naval wargames, but these look like they will float my boat, if you'll excuse the pun. They can also be combined with the Portable Wargames rules for some combined actions, which always gives a nice look and challenge. There is also the temptation of scratch building your own fleet, which fits in rather nicely with my Imagi-Nations ideas of the protaganists having a shared border along a lake, similar in size to those that you see in Austria.
Lots to do so until next time.
Posted by Steve J. at 04:04 7 comments:

Email ThisBlogThis!Share to TwitterShare to FacebookShare to Pinterest
Labels: The Portable Wargame

I had planned on not really buying any rules this year, given that I have loads, very few of which I actually get to play. But a case of the flu last week saw me perusing several Blogs which resulted in some retail therapy in the form of the following books by Bob Cordery: 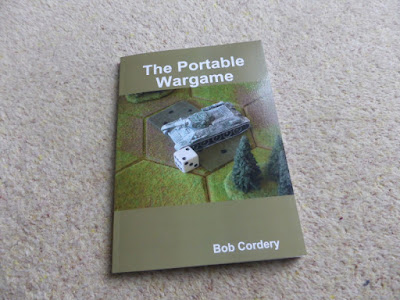 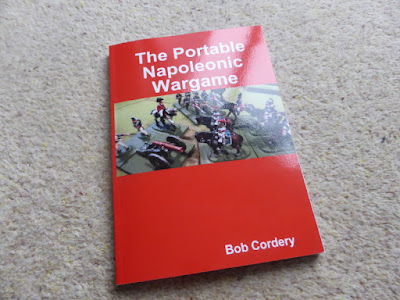 I had considered the first one a year or so ago, but it didn't seem to float my boat at the time, given that it involved the use of squares or hexes. Things have moved on since then with games of both 'To the Strongest' and 'For Kind & Parliament', all of which use a gridded table and which i have thoroughly enjoyed. The second one is Bob's latest offering, which looked good and was a reasonable price.

The books duly arrived a few days ago and I eagerly opened the packages. My first impression was that the books were rather smaller than I had expected, but appearances can be deceptive. Both were given a quick flick through and I must say I was very impressed with what I saw. I particularly liked the history part of gridded games but I was really taken with the rules themselves. They were well presented and explained, being simple to grasp but with enough detail to give a good game. So I was very happy with my purchases!

So some free time today saw me dig out my small gridded 2' x 2' board, some terrain and my trusty wooden blocks to give the rules a quick run through, which can be seen below: 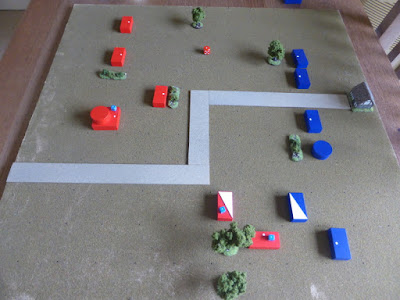 Despite this being my first game, everything flowed really well and felt very intuitive and I picked up the basics almost straight away. Re-reading the rules after the game, I only made one mistake, which is not bad for a first game. Most importantly I enjoyed the game and the rules themselves. So below are some initial thoughts on the rules:


Given the ease of setting up a game, my aim is to get some more games in this weekend. Then there is the small issue of making some bespoke terrain and a board, but that can wait for the moment. Easy to do but I really should focus on some figures first. Until next time.