I managed to kick off my narrative campaign as planned a few days ago, with it still set in the New World in the 17thC. As yet I'm not sure whether to have it in and around the time of King William's War, or the early part of the century. The former is more tempting as I can include some Salem style witch trials should they take my fancy which could then include some Dragon Rampant 'magic'. Anyway, that's in the future.

The background fluff has not been fully fledged out, but broadly speaking we have the following to get things going:

Nikolaus Vermuyden. An Ensign in the employ of the Dutch West Indies Company, he is an experienced, but at times brutal officer, who suffers from a wound gained in previous battles in Europe.

Sir Richard Grenville. An Ensign in the employ of the Royal Virginia Company of London, he is relatively inexperienced in battle, but is a strong and patient officer.

Dawn Patrol.
There have been some minor skirmishes and raids along the borders of the two Companies territories. As such, the powers that be have seen fit to make a show of force, so at to both reassure their folk as well as to intimidate the opposition. Both sides have been patrolling in the early morning and are on their way back to their encampments when they stumble across each other as the morning mist clears.


Post Game Thoughts
In the end a rather convincing Dutch victory, but it didn't look like that early on as the English we able to out manoeuvre the Dutch. A fun game and one that lasted about an hour or so all told. So some thoughts on the rules, the game etc:

So plenty to be getting on with and to come up with the next logical scenario. I also need to plan a BKCII game for a weeks time as Adam is coming around for a game, as well as paint up a few units. So until next time...
Posted by Steve J. at 04:04 12 comments:

One of my plans for this year was to finish off my English Civil War figures and run a narrative campaign using the excellent 'The Pikemen's Lament' rules. Like many of my plans, it never really got off the ground. Given my current enforced rest as I recover from major surgery, I thought it high time I revisited this idea, given that I wanted something different from BKCII to tickle my wargaming buds.

So this afternoon I dug out my figures and knocked up a really quick game, based upon a rough premise of some action in the New World of the Americas, between some English and Dutch Colonists supported by some Native American Indians. As simple as that but I find it nice to have a bit of 'fluff' to go with my games. I plan to expand upon this over the next few days for my campaign.

Anyway, the game was great fun and even though I hadn't played for ages, it all came back to me with only occasional glances at the rulebook. I took a few 'photos for those that might be interested in another 2' x 2' game format. All the figures are from Pendraken's excellent 10mm range and I simply halved all the distances in the rulebook.

So my next challenge is to paint up some extra units, which should hopefully start this weekend, as they are all based and prepped and are just awaiting my attention. I would like to add some Dragoons, but doubt they were much used in the New World at this point in time. I hate painting horses but will have to bite the bullet at some point though.

On a related note Michael Leck has received his advanced copies of the new 'Rebels and Patriots' rules from Osprey. I was involved in the playtesting of these, which I really enjoyed and think they are a great set of rules. But  to misquote Mandy Rice-Davies; "Well he would say that, wouldn't he?"

The Battle for Buron - a BKCII AAR

A post on Norm's excellent Blog got me thinking about whether BKCII could be played on a 2' x 2' table. So I decided to give it a go and, given that I'm currently reading about the Canadians in Normandy, set the scenario as a fictional encounter on D-day +2.

Objective
Broadly speaking the Canadians are still advancing from the bridgehead and have been tasked with seizing control of the village of Buron. A German Fallschirmjager Kampfgruppe is making a reconnaissance in force, with the objective of forming a good defensive position in Buron from where they will be able to launch further attacks.

Set Up
The table was set up with the village in the centre and the important road network coming in from several directions. 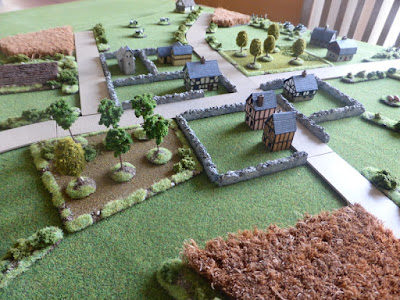 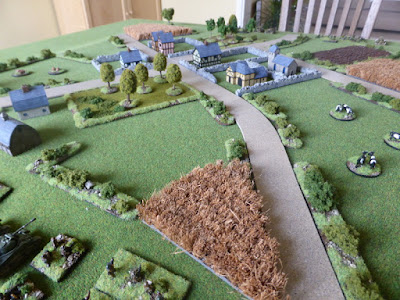 Turn 1
I randomly rolled to see who went first and it was the Germans. The German right flank advanced well, almost reaching the outskirts of the village, but the left flank failed to arrive. All of the Canadians appeared and cautiously advanced forward.


Turn 2
The Germans continue to advance as best they can, whilst both Canadian HQs fail their command rolls.


Turn 3
With no targets, the Germans advance as best the can. In contrast to the last Turn, the Canadians really take it to the enemy. The right flank gets a Double 1, then a command followed by another Double 1. This the Stug III, a PzIV and some Fallschirmjager units destroyed for just two suppressed tanks. The left flank is not quite so effective, but still destroys an MG unit.


Turn 4
Stunned by the attack, the Germans mount some Initiative moves and firing, but to little effect, with both their HQ units then failing their command rolls. Once again the die Gods favour the Canadian right flank, who once again roll a Double 1 followed by two more successful commands. More Fallschirmjagers are destroyed and an HQ overrun. The right flank advance but can only suppress some German units.


Unsurprisingly the Fallschirmjager wisely decided to withdraw, given their losses and that they were out flanked, even though they passed their Break test, leaving the Canadians to occupy Buron.

Post Game Thoughts
Well that was over more quickly than I thought, but was nevertheless and enjoyable game and one that worked well, even though it was played out on a 2' x 2' table. So what did I think of the game?:


So what next game wise? I think I've had enough of WWII for now. I'm tempted to have a go at Dragon Rampant just for fun and again can play it quickly and easily on a 2' x 2' table. First I need to knock up some lists so that I'm not constantly referring to the book. So until next time.