The Battle for Minden - an HoW AAR

With Dave having recently finished his SYW French, it was only natural that we would have to give them their debut as soon as possible, and naturally it would have to be against the British! So what sort of scenario to use for this august occasion? Well it had to be Minden really, now didn't it? Now given the time, space and forces at our disposal, we simply used this battle as the basis for a game, namely the layout of the battlefield:

Forces
Given the available painted figures, we decided to go with identical forces, with the only difference being in the command ratings of the various Brigade commanders and General, decided by a die roll once deployed as normal for our games. So each side had:

Suprisingly the French  rolled well for their commands, with all of them being 'Dependable', which was echoed by the British, but they ended up with a 'Dashing' General.

Deployment
As I was the French, I set out my troops in with the Grenadiers holding the right flank (point of honour) and the cavalry the left, with the rest of the troops in a broad straight line. Dave followed a similar, but mirrored deployment.

Turn 1
Things got off to a poor start for the British as their Dragoons failed to move twice, despite having a re-roll courtesy of their 'Dashing' General. However the rest of their units moved as required, whilst the French held their line. As both sides opened up with their artillery, the French were truly shocking (being able to hit a barn door sprang to mind) whilst the British inflicted 4 hits on the French cavalry, forcing them back disordered.

Turn 2
The French advanced whilst the British dressed their lines and then the artillery continued their exchanges of fire. This time the French Grenadiers caused 4 hits on the British cavalry in a tit-for-tat exchange of fire. 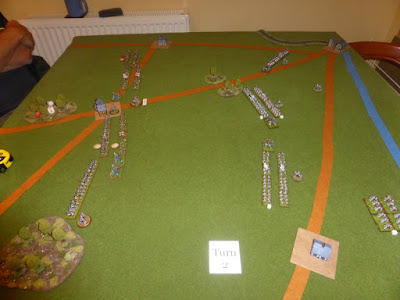 Turn 3
The neat battle lines start to fragment under the effects of artillery fire and poor command rolls. One French Line battalion is forced back whilst their cavalry moves into a town in prepration of trying to flank the British Grenadiers. The French suffer as one of their Brigade commanders becomes 'hors de combat' after being hit by a stray cannonball, with a 'chinless wonder' (Dithering) taking his place. Whilst the French General moves over to offer words of encouragement, the British General is happily rallying off hits from his troops due to his commanding presence!

Turn 4
In a classic moment, I said words to the effect of: "As he's now a Dithering commander, if he rolls a 1, his Brigade will have to retreat." It will come a no suprise that I then proceeded to roll a 1, causing the Brigade to retreat as 'predicted'. Next time keep my mouth shut!

Elsewhere there was widespread movement and shooting right across the table, with the British broadly on the front foot.

Turn 5
As the British close, both sides left flanks come under pressure and the battle starts to wheel anti-clockwise around the centre.

Turn 6
The battle takes on a distinctly English Civil War feel as the line continues to wheel around the centre. As the fighting intensifies, both side lose units, with the French slightly worse off.

Turn 7
As the battle raged on, the French left flank collapsed as a result of the weight of fire from the British Grenadiers. The British were under pressure as well, but the next Turn would be telling as to who might win.

Turn 8
As the French desperately tried to dress their lines, the British Dragoons charged in and destroyed the French Grenadiers.


At this point the French, being well and truly beaten, withdrew into Minden to lick their wounds.


Post Game Thoughts
Despite the overwhelming British victory, it was a good game and at one point could have gone the way of the French. Losing out on the Fire Intitiative at crucial times certainly counted against the French. So as always a few thoughts on the game:


So, we are due for another game next week, but I need to look at some of my scenario books or other battles for some inspiration. We may even try some form of hidden deployment to add a bit of 'fog of war' to our games. In the meantime I'm cracking on with my AWI/ImagiNations force so that I hope to be able to field a Battalion in the near future. They are bound to lose due to the curse of the newly painted unit!
Posted by Steve J. at 11:43