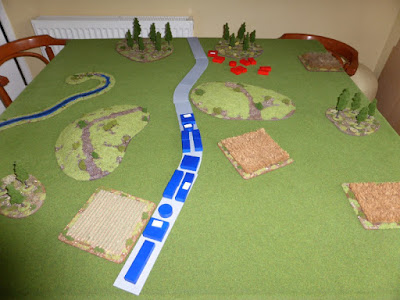 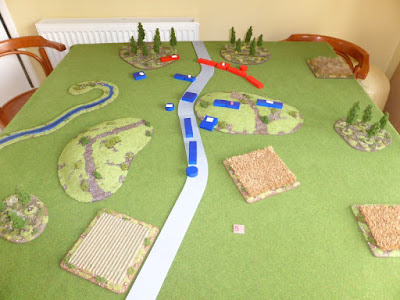 
Well, I hope to be able to get another game in soon as I really enjoyed this first solo run out. I think I will try and find a scenario more suited to the SYW period to give both sides an even chance. I will have a browse thought the scenario book as well as the simply superb Kronoskaf website. I'm sure I will be able to find something suitable.
Posted by Steve J. at 01:26 6 comments:

Background
Last week we decided to have a break from Black Powder and chose to give Hail Caesar a run out. Despite having had the rules for over a year, I had never had a game with them, with Dux Bellorum having giving me my 'Ancients' fix. So what forces to go with four our inaugral game? Dave fancied giving his Mongols a run out (or should that be gallop?) against his Brettonians masquerading as Medieval French.

Scenario
This was to be a variation on one that Dave had run at his club before, with the Bretonnians having to escort a siege engine off the table, whilst under Mongol attacks from all sides. The Bretonnians deployed off table in line-of-march, with the Mongols organised into 4 Tumen that would randomly arrive and various points on the table.

As this was a first game and very much a learning exercise for me, we weren't too worried about details of winning and losing, rather just getting familiar with the game mechanics after all of those Black Powder games.

The Battle
As per recent games, the captioned photos will provide a guide to how the game payed out.

The End
With the loss of the Kinghts it really was game over. We looked at the lie of the land and both agreed that there was no that the Bretonnians could possibly salvage anything from the game and so called it a day.

Post Game Thoughts
So not a bad game but one that was certainly very different from the Black Powder games we had played. So some thoughts on the game and rules:

So all-in-all another good evenings gaming. Certainly more taxing than Black Powder due to this being my first game. With regards the points raised above, we decided that the next game would be a classic Romans vs Ancient Britons, which hopefully will be easier to come to terms with. Only time will tell...
Posted by Steve J. at 10:48 6 comments:

The French Cavalry Charge at Waterloo - A Black Powder AAR

Background
I wasn't sure what sort of scenario Dave was going to concoct for our final Nappies game. After last weeks sojourn in the Peninsular War, I was expecting it to be a follow on from that scenario. In fact it was something completely different.

Basically it was an excuse for Dave to get a lot of rarely used toys on the table and to see how cavalry performed when faced by infantry in formed squares. So the scenario was based upon Ney's cavalry charge when the Allied troops retreated from the ridge at Waterloo, a sort of 'what if' action.

Scenario
In the face of massed French artillery fire, the Allied troops have moved back from the ridge at Waterloo. Ney believing that the Allies are in retreat, has ordered his cavalry to attack and open up the road to Brussels. In support are the French Young Guard. The Dutch troops hearing the thunder of horses hooves have formed up in Battalion squares to try and block the Brussels road.

The Dutch have formed up with some artillery units in support. The French cavalry and infantry arrive over a period of 6 Turns, to reflect the nature of the French attack. Some of the units have supporting artillery

Forces
The French cavalry is a mix of Dragoons, Lancers and Cuirassiers. The artillery is a mix of horse and foot drawn.  The commanders are rated CV8 but have the bonus of being Reliable and when in Attack Column, thus often rated at CV10.

The Dutch are all standard Line Infantry with a unit of Hussars and their sole commander is also rated CV8.

The Battle
The Dutch deployed behind the ridge line and astride the Brussels road. The French units all begin off table and arrive as specified by the scenario.

The End
Sadly at this point the clock defeated us. We looked at the situation and agreed that after one or two Turns the French would have reduced the Dutch line to a point that the cavalry could have advanced on towards Brussels whilst the Young and Middle Guard mopped up any remants.

Post Game Thoughts
Well once again a very enjoyable game of Black Powder and very different from all the previous games. The scenario was very enjoyable and we weren't sure how the rules would cope with cavalry versus Battalion squares, butwe both agreed that the rules worked very well. So a few post game thoughts.

So after a brief chat our next foray will be with Hail Caeser! and most likely Teutons versus Mongols. Time to get reading the rulebook but at least the mechanics are the same.