Whilst checking out the ever excellent Panzerkaput's Blog , I saw that his latest addition to his AVBCW troops was one of these frankly bizarre pieces of kit. 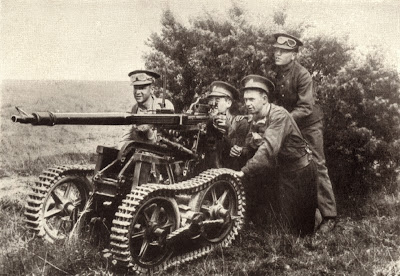 Now I've never seen or heard of this Oerlikon cannon, but the moment I clapped eyes on it, I wanted one for my own 10mm AVBCW forces. A quick search on the internet revealed nothing, but Mutton Chop Miniatures have a nice little kit that will be enough info for me.

I intend to use a Universal/Bren Carrier as the tow and scratch build the limber and gun. When I will get around to this Lord only knows, but I must admit it would look great on the wargames table. Talking of which, I would love one of these as well...

As this was to be a demo game at our favourite show, we wanted to have a good mix of warbands as well as special rules to show the game in its best light. A couple of trial games later and Craig and I, who were providing the figures (not forgetting Pendraken who sponsored two of the warbands), had the scenario nailed and the warbands composition drawn up. I chose to be the Saxons who were the Agressors, and Craig the Britons who were the Repellers. Details of my warbands can be found below:

Cuthwin's Warband - 6th Century Sea Raiders
These were to be a small, but highly skilled raiding force, as reflected in the high number of noble warriors.

Ceawlin's Warband - 6th Century Saxons
These were to be a larger warband, with the higher numbers to allow them to take more losses before reaching their morale test point.


The game was to be a demo rather than participation, but for a variety of reasons, we ended up running as a semi-participation game for a few members off the Pendraken forum. This proved to be great fun and allowed Craig and I to spend more time seeing the show, which was nice.

Unfortunately my dsytonia was playing up after the drive down and the rest of my pics had bad camera shake. To add insult to injury I forgot to take pics of other tables at the show!

General thoughts on the show.
For the first time I was able to have a reasonable walk of the show, as in previous years I have always been too busy running or taking part in a demo game. So my thoughts are as follows:

Bruce Weigle
The highlight of the show for me was without a doubt the Rossbrunn table put on by Bruce Weigle of Grand Tactical Rules. Quite simply it was the nicest table I've seen in years. Other tables at the show were very good and certainly 'eye candy', but to my mind looked too crowded and 'fussy'. The elegant simplicity of Bruce's table instantly caught my eye and made me want to have a game. Unfortunately as I was running a demo game, I was unable to.

Quite by chance I got talking to one of Bruce's friends, Mike Embree, which in the end led me to buy a copy of both the '1859' and '1866' rules. As many people know, these are far more than rulebooks and I'm so happy that I bumped into Mike. They are packed full of information for the relevant periods as well as superb scenarios and OOBs, on top of containing a complete set of rules. I certainly am looking forward to giving these a go in the future.

Closing thoughts.
Well certainly this was another enjoyable show, and one that I look forward to attending each year. You never know what you are going to see, who you might bump into or what purchases you may make. We are already thinking about what table to put on next year.

Sadly the show was once again plagued by another series of thefts. This only seems to happen to this show, but is a real shame for the traders and us gamers. It would be a sad day if a few thiefs put off traders from attending to the detriment of all of us.
Posted by Steve J. at 12:22 4 comments:

A couple of months ago my good friend and regular gaming chum Craig approached me to see if I would be able to make a bespoke hill for him. A few years ago I had made a couple for his Normandy '44 scenery, so I thought this would be along similar lines. How wrong could I be?

This time he wanted a very specific hill for use with his Star & Garter medieval rules, a variant of the excellent Dux Bellorum rules by Dan mersey. Not a problem, so I asked Craig to sketch up his ideas with some dimensions so that I had an idea exactly what he was after.

Well my first reaction was "F*ck me, that's big". I sat down and looked at the drawings again and my reaction hadn't changed one jot. Was Craig compensating for some inadequacy in his life? I wasn't sure but I certainly wasn't going to ask!

My first task was to take Craig's sketches and draw the hill to scale. Very quickly it became apparent that it would have to grow to achieve the look that Craig was after. The constraining feature was a central plateau that had to be 12" x 10" to accomodate buildings for use with S&G. The height of the plateau was to be around 2" so that it really dominated the table. In the end the length increased by around 3" and the width maringally so, to give an overall size of 27" x 18". I showed the drawings to Craig who was happy and so it was then onto construction.

The hill was based on a piece of 3mm mdf to give it stability with a piece of 2" foam stuck on top. They were then sculpted to shape by hand until the right look was achieved. The whole piece was then covered in pva glue in stages and covered in a mix of sand and grit. When this was dry it was given a base coat of paint, which was then locally highlighted to create the paths etc. After this clump foliage was glued in place, which when dry was followed by a coat of diluted pva and static grass flock.

The hill in itself was easy to make, the challenge came in the sheer size of it as it was hard to handle when gluing on the grit and flock. To give an idea of how long it took to make, I've broken it down into the following stages:
So it turned into a real labour of love but I'm very happy with the result. So for anyone attending Colours this year you will be able to see the finished result on table S13 on the Sunday and you can judge for yourself whether it was worth the effort.


Postscript
Craig collected the hill on Saturday and was very happy with the result which was nice. He planned to have a solo game of Chain of Command on Sunday to christen the hill and the results can be seen here. The hill really fits in nicely with his existing terrain and the other hills I made for him a few years ago.

My wife was very impressed with the look of Craig's table and her comment was" You guys are very talented but completely mad". Enough said...
Posted by Steve J. at 01:47 1 comment: