"Oi' Gerrof my land!" or the Battle for Hanham.

Having made some counters for a variety of warbands for Dux Bellorum, it was time to get a trial game in to see how the rules played. For the first game I wanted to keep things nice and simple, so used the sample warbands from the book as a guide, with no Strategy &Tactics options taken.

Both warbands had 6 Leadership Points each. Being a solo game I decided that the Late Romans would use their LPs mainly for defence when in close combat, with the Saxons using theirs for offence. This seemed in keeping to me with the Late Romans being a Shieldwall warband and the Saxons a Warriors warband.

So with the Warbands sorted it was time to choose a scenario. Again keeping things nice and simple (the KISS principle works for me) I went for an Annals Battle. This way I could concentrate on the rules rather than the various nuances that a more involved scenario might entail. Unsuprisingly the Saxons won the die roll for Agressors, which is entirely in keeping with their image. So the poor Late Romans had the unenviable task of defending their land from the marauding Pagans.

Deployment
For a first game again I went for the simple approach and played the game on a 2' x 2' table. Scenery was kept minimal  as befitting the Late Roman Repellors with a wood and hedgeline in opposing table quarters.

Deployment was as per the rulebook with the Saxons forming three battle lines with Hyngga and his Nobles in the centre, flanked by Warriors on either side. The Late Romans formed as solid shieldwall in the centre with skirmisher in the woods on the left flank and Cycnwyl Cadarn and his cavalry on the right flank.


Turn1
Both sides used their LPs to aid movement as there was no chance of combat being joined at this early stage of the battle, with each warband advancing forward whilst maintaining a cohesive battle line. No one wants to leave a flank hanging in the air, even in the Dark Ages!

Turn2
Again, each warband used it's LPs to ensure they passed their Bravery rolls. Both sides used their skirmishers with bows to shoot at their opponents, with neither side inflicting any hits. Both sides continued to advance in their respective battlelines as before.

Turn3
With combat highly likely this Turn, the Late Romans used the LPs to remove hits taken by the Shieldwall Warrios and the Cavalry. The Saxons on the other hand allocated their LPs to aid their attacks, with the Warriors on the Left Flank and the Companions in the centre sharing them equally.

The Late Roman skirmishers got the better of the shooting phase, with the Mounted Skirmishers with Javelins inflicting 1 hit on a Warrior unit, whilst the Skirmishers in the wood caused 2 hits on the Saxon Skirmishers with bows. The Late Romans with Bow were not to be outdone and caused a hit on the Warriors directly in front of them. The Saxons failed to cause any hits in return, but were not too worried as shooting is not their forte. Up close and personal is more their style.

With the shooting out of the way, it was time for some combat. The Mounted Skirmishers with Javelin decided to withdraw out of charge range of the Saxon Warriors, whilst Cynwyl Cadarn and his cavalry charged home into the Saxon left flank. For the Saxons their bloodlust was up and they did not bother to attempt to stop their  uncontrolled charges, with the left flank attacking the Skirmishers in the wood and Hyngga and his Nobles charging into the Shieldwall.

The Saxon right flank easily saw off the Skirmishers with bow, but received a hit for their troubles. In the centre the Saxon Warriors combat with the Late Roman bow was a bit embarassing as they only inflicted 1 hit, causing the Foot Bow to retreat 1/2 a base width. Hynggas Companions attacks were seen off but the judicious use of the Late Roman LPs to save the hits cause, resulting in a drawn combat. The Noble Warriors faired better inflicting 1 hit on the Shieldwall forcing it back 1/2 a base width.

Cynwyl Cadarn and his cavalry decided to use their LPs to add to their agression as they had got the charge in, with the Saxons doing the same trusting that the Gods would see them safe. The first combat was a draw, but Cynwyl Cadarn forced the central unit of Saxons back 1/2 a base width. Unfortuntely for the Late Romans, the Orindary Riders failed miserably and were destroyed by Saxon testorone, but at least caused 2 hits in return.


Turn4
The Late Romans were now down by 2 LPs due to the loss of their Skirmishers and Cavalry unit. This was going to make it hard to decide where and how use their 4 LPs this turn. The advantage definitely looked to be with the Saxons.

There was little shooting but the remaining Late Roman Skirmishers with Bow saw off their opposite numbers.

Unsuprisingly the remaining Skrimishers with Bow succumbed to a massive Saxon onslaught, but at least went down fighting causing 1 hit in return. In the centre the Shieldwall was forced back by a succession of saxon attacks, despite using their few remaining LPs to save some hits. The Late Roman cavalry fared badly, causing plenty of hits, but losing the noble Riders, which meant that Cynwyl Cadarn and his Companions were left facing 3 Saxon Warriors units, albeit with quite a few hits on them.


End of Battle
With the loss of another two units, the Late Romans were now down to only 2 LPs and with one flank turned and the other very much at risk of being broken. With the situation as it was I decided to call it a day, with the Late Romans leaving the field and the Saxons victorious.

Conclusions
For a first game of Dux Bellorum I must say it all went very well and I hardly had to refer to the rulebook, mainly using the QRS throughout. I think this speaks volumes about the quality of the rules. So  a few impressions of the game can be found below:

So there you have it. My first game of Dux Bellorum and one that I must say I enjoyed immensely. I'm already looking forward to my next game and many more in the future. Now I must find some time and place an order with those Pendraken chaps so that I can play with figures rather than counters!
Posted by Steve J. at 04:27 4 comments:

My first tentative steps into wargaming took place in the dim and distant past of the 1970s, when my friends and I started using the Airfix WW2 wargames rules by Bruce Quarrie, to go with our Airfix and Matchbox figures and tanks. Alongside these appeared 'The Quest of Thane Tostig', a simple set of wargames rules that introduced me to fantasy skirmish wargaming. This in turn led to playing 1st edition D&D at school, as well as Chainmail and another game, the name of which escapes me.

In short I was hooked on skirmish wargames, as I enjoyed the whole 'ancients' feel of the games as well as the fun of painting up just a few figures required for a game. Then real life intervened in the form of university and wargaming took a back seat, except for the odd boardgame game snatched between projects.

Then, like many others I'm sure, I drifted back into wargaming whilst living in Nottingham as a result of looking in the Games Workshop window. I dabbled in Warhammer but although the 'period' was right, I just never got into the game the way that others did. However I still bought the then excellent White Dwarf magazine as I used to buy it when it first came out, and in a sense kept up with what was going on at Games Workshop. An article appeared with some simple rules for a game called 'Mordheim', that ticked all the boxes as far as I was concerned and which took me back to my formative wargames years.

I happily played these to the exclusion of all else for about 5 years until it stopped being supported by Games Workshop, coupled with my regular gaming chums being unable to make it to club nights. So ended my skirmish gaming. I even tried Lord of the Rings which was good, but this never took off at the club. The same was true of Legends of the High Seas. All was not lost as I rediscovered WWII wargaming in the form of Flames of War, which was quickly ditched for the superb Blitzkreig Commander. Alongside this I played Rules of Engagement so I was getting my fix of skirmish gaming.

Lately however I have been looking to go back to my wargaming roots so to speak. With the appearance of several 'ancients' rules of late, it seemed I would be spoilt for choice. So which ruleset to choose? 'Hail Caesar' by Warlord Games, SAGA, 'Dux Brittaniarum' by TTFL and finally 'Dux Bellorum' by Osprey Publishing all have their advocates and I'm sure produce good games. One of the joys, and pitfalls, of the internet, is that you can find plenty of online reviews of each game on various forums, Blogs etc. This is a blessing and, equally, a curse as it can get a bit confusing with a host of different views on offer.

After plenty of reading I settled on 'Dux Bellorum'. 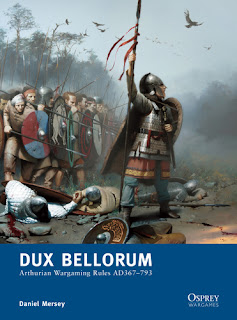 I won't bore you with why I rejected the others, but a few reasons can be found below as to why I selected this ruleset:
So the book was duly ordered and I waited with keen anticipation for them to arrive. I was not to be disappointed in my purchase. So a few first impressions:


So there you have it. A set of rules that I'm extremely glad I bought and can't wait to get my first game in. They may not be for you but I'd recommend having a look at them if you can.