Today I made my annual trip to Reveille II, a wargaming show in Bristol put on by Lincombe Barn Wargames Society. For the first time in a good few years I was not having a table as a private seller, so was able to actually have a good look at the show itself. When selling, or putting on a demo game for that matter, you never really have a chance to have a good wander and chat with people.

I had arranged to meet up with Craig, my regular wargaming partner for a chat and general look around the show. It was our first chance to get together since Colours. I was also to meet Guy Farrish of Warrfarr books who had kindly provided some prizes at MadFest in the form of book tokens, which I was fortunate enough to win, and Christian, another wargaming partner, who had kindly collected a Pendraken order for me at Warfare, again the result of my luck at MadFest.

Whilst walking the show we saw a few familiar faces from Portbury Knights that we hadn't seen for a few years, so it was good to catch up with them and have a chat in general. We all bemoaned the general lack of time that we have for wargaming, as by and large our kids are of similar ages, and naturally they come first! To a man we all wished we had a dedicated games room so that we could leave stuff out and pop in for the odd hour to play a few turns etc. This is something to dream of when the kids have flown the nest.

So enough waffling from me and onto the show. Spread over two main halls and a few side rooms, this is small by the standards of Warfare and Colours. However it is my local show and so I try and support it each year to keep it going. I arrived early to get a car space and then went to have a chat with Michael of Angel Barracks. Fortunately his new range of 6mm sci-fi figures that we had seen at MadFest had arrived the day before, so I eagerly snapped up a pack of each set. They are superbly sculpted and the detail has to be seen to be believed! As with all my other projects, I just need to find the time to base them up etc. As they are so nice I don't want to rush these and really want to do them justice with a good paint job.

After a quick tour of the halls with the usual traders, it was off to the bring'n'buy and the private sellers rooms. The B'n'B had the usual mass of Games Workshop bit'n'pieces that you seem to see each year, as well as quite a few FoW books. This was also reflected with the private sellers. Each year there seems to be a theme of stuff being sold with this years being FoW books. Alan Vowles of Portbury Knights fame was off-loading pretty much most of his extensive wargames collection. All beautifully painted and sad to see, but like the rest of us just lack of gaming time meant that he no longer needed to keep it.

So onto the demo and participation games. This is one area the I have found has been a bit hit and miss in the past at this show. Fortunately this year the quality was very good with a nice mix of games and scales, although predominantly 28mm. The only downside was due to the small size of the rooms, it was very hard to get a good view of the games or to have a chat.

So another year over and a nice few hours spent with some good friends. I will be returning for the Table Top Sale in the late Spring in the hope of offloading some of my excess wargames stuff. Hopefully the above has given you add good idea of the show and it would be nice if you were able to attend in the future.

Saturday 10th November saw me rise nice and early to load the car up with all my gaming stuff. After a quick breakfast I was on the road by 7.00am for the anticipated couple of hours drive to Minehead. The doors were to officially open at 10.00am, so I wanted to get there nice and early to have time to set up the table etc. As it turned out the traffic was very light, the weather pretty good and the scenery fantastic once across the M5 and into the Quantocks. As it happened I arrived with plenty of time to spare, so popped in to see Nik Harwood as we hadn't met since NikFest nearly 2 years previously. After a quick chat, being mobbed by his lovely dogs and saying hello to Isaac his son, I was back on the road for the last few miles to Minehead.

The venue was very easy to find being located on the harbour front in the Old Ship Aground pub. Fortunately I was able to park right outside, which made the job of un-loading all of my stuff very easy, especially as Keith, Paul and KD gave me a much appreciated helping hand. After a quick chat with the other players, I set about setting up the table which I completed by around 10.00am

I'd decided upon an A Very British Civil War scenario set in and around Dunster, given that it fitted in with our on-going Storm Clouds Gather campaign. It was very much a toys-on-the-table job as I wanted to have plenty of units so that anyone could join in and command a battalion. As it turned out this was a bit overkill a few players were unable to make it at the last minute, so Keith and KD played the game solo.

The scenario was a mix of an airborne assault in the early morning followed up by seaborne forces landing on the beach at Dunster. The attackers were Army of the Severn Valley and their objective was to take control of the railway station and the Dunster junction on the Minehead road. The defenders were the Loyal Army of the South and their objective was to deny the attackers the station and junction.

With Keith and KD both being experienced BKC players, I had only to answer the odd query on the briefing documents I had given them as well as the odd question here and there as the game progressed. As I spent most of the day wandering around chatting with fellow gamers, I didn't take detailed notes, but hopefully the pics below will give you a feel of the game.

There were a few other games on display, some of which I managed to take pics of. Apolgies for forgetting to take some of the Western Desert  and the FPW ones. Hopefully others will have done and will appear on Blogs etc in due course.

First up Michael of Angel Barracks superb scratch built sci-fi base in 6mm for use with FUBAR rules. Unfortunately my camera, or more likely me, are unable to do this justice. We were also able to see his new range of stunning 6mm figures that will hopefully be on release before Xmas. I and a few others succumbed to some starter packs that were nicely discounted for the show. 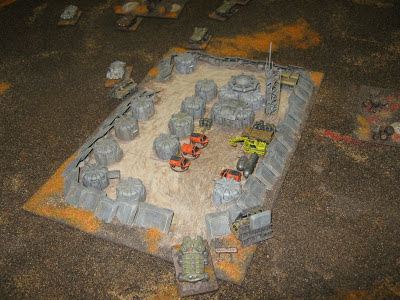 Nik Harwoods 3mm CWC forces. Again at this scale it's very hard to do them justice. It shows that you can have a great looking game in the smaller scale figures. Paul Case spent all day running this table and was constantly busy. IIRC it was NATO vs Warsaw Pact. 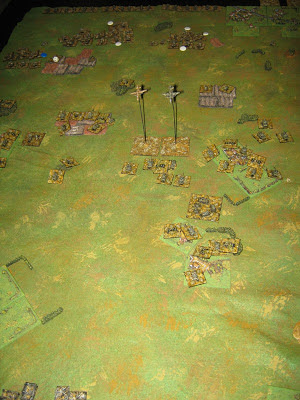 Last and by no means least was Keith Flint's superb SYW table with his 28mm figures and scenery. This attracted a lot of attention at the end of the day, and rightly so, with several players joing in using his own rules. 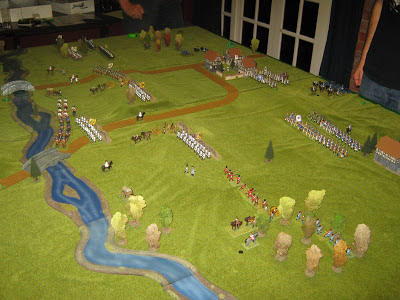 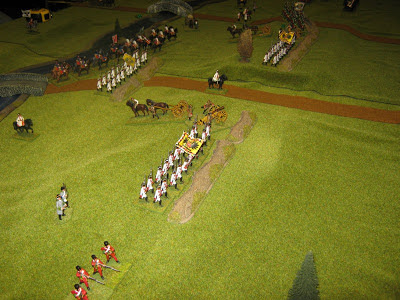 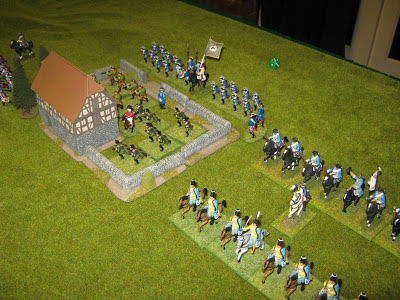 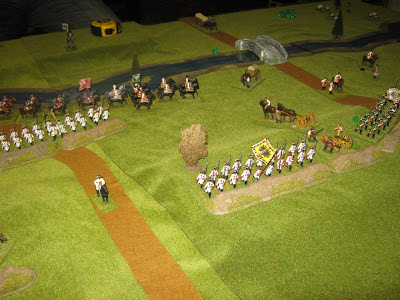 Conclusion.
In the end it was a great day out and well worth the trip down to Minehead. I spent an awful ot of the day just chatting and in the end didn't get to play a game! This didn't matter as the atmosphere was nice and convivial and the day flew by. Once again thanks to Nik Harwood and the Minehead wargames club for putting this show on and also to all the companies and people who donated prizes for the raffle and quiz. I will definitely be attending the next one.
Posted by Steve J. at 03:19 1 comment: