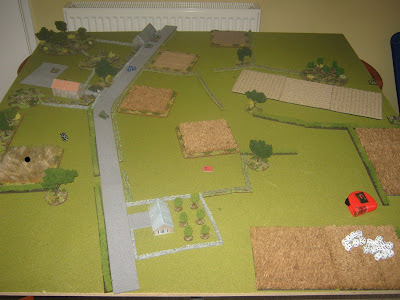 Turn 2
Major Thornbury arrives (but no-one else from the AotSV) and promptly advances at full speed ahead towards the MMs. Some MG, mortar and IG fire suppresses an infantry unit.
Turn 3
The Bristol Biplane arrives and suppresses 2 tanks, 2 militia, 1 IG and an MG unit. Captain Yate arrives, but no sign of the KGL under Kapitan Ewald. Thornbury advances his tanks around to the right flank as more co-ordinated fire from the MMs suppresses one infantry unit.
Turn 4
No action at all from the AotSV due to Blunders or failed command rolls. Meanwhile the MMs under Bartlett and Pike are having a field day, destroying two of the infantry units attached to the tanks and suppressing the other. A perfect display of combined arms operations. Well done chaps!
Turn 5 (or Time for Tea!)
With the loss of most of the supporting infantry and the tardy nature of both Yate and Ewald, things are not looking too rosy for the AotSV. However, all COs and HQs on both sides fail their command rolls. Obviously they were taking a bit of tiffin' as this war business can be damned thirsty work!
Turn 6
Kapitan Ewald finally arrives with the KGL, but probably too late to affect the outcome. Captain Yate stands his ground whilst the tanks engage the Beast of Bodmin in a dual to the death. Despite a spirited resistance, the Beast succumbs to the superior fire power of the Vickers tanks. Bartlett and Pike continue their brilliant marshalling of their meagre forces and destroy the final supporting infantry unit.
Turn 7
Yate and Ewald move too little too late to affect the outocme of the battle. In a last desperate bid for victory, the Vickers turn their fire on 'Flash', the Whippet tank, but can only supress it before Thornbury blunders, effectively removing any chance of the AotSV defeating the MMs.
Bartlett and Pike turn their fire onto the KGL, destroying one infantry unit and suppressing another, as well as moving into position to assault the tanks.
Turn 8
A last ditch attempt by the AotSV to gain victory failed as once again the CO and HQs all failed thier command rolls! With victory already assured, Bartlett and Pike set about assaulting the Vickers tanks. With consumate skill, two militia units assaulted the three tanks, one at a time, destroying all three without them suffering a scratch.
Losses
The AotSV lost 3 tanks and 5 infantry units to the MMs solitary MkV tank. A resounding victory for the MMs to say the least!
Thoughts on the game
It was always going to be hard for the AotSV to dislodge the MMs from their colliery, but it certainly became a challenge almost from Turn 1, when not a single unit arrived. With so many failed command rolls, and the few blunders through out the game, the game as a contest was over by Turn 4. With the Tea Break of Turn 5 any chance of a victory for the AotSV had definately gone.
However I decided to carry on to see if things could be turned around to affect the overall campaign, but if anything, things got worse. So with such a convincing victory for the MMs, this campaign has now closed. In a few weeks I will have come up with another area and forces to do battle. Watch this space.
Posted by Steve J. at 13:29 1 comment: