The Shenandoah Valley 1862 - The Battle for Kayephcee

Our ACW campaign reached its conclusion with the final battle played out a few days ago. As the Confederates had taken a bit of a kicking so far ( a slight understatement) I was hoping Lady Luck and the Die Gods would be on my side...

Background
Colonel Sanders of Kentucky had set up his defensive positions in and around the town of Kayephcee (place of good eating in the local tongue), with the aim of halting the Yankee advance and thus preventing a break out into the Shenandoah Valley and the threat of cutting off Jackson's lines of communication. He had less troops than he would have liked due to recent losses further up the valley and was particularly worried about his deficiency in cavalry. After all the Union Colonel Shirley Wayne had been acting like old Jeb Stuart in his brave and daring exploits.

Yankees OOB
As they hadn't suffered any losses so far, the Union OOB was the same as at the start of the campaign. 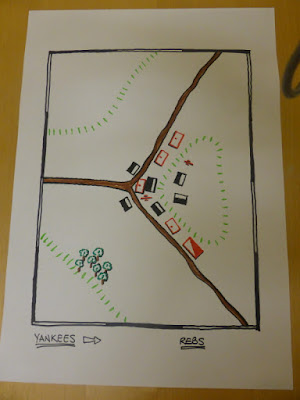 Deployment
The Confederates deployed their artillery on the hill, trying to cover as much of the Union attack as they could. The 2nd & 3rd Kentucky were to the North of the town on the right flank, whilst the troops from Mississippi to the South on the left, with the cavalry mounted and ready to meet the Union cavalry threat.

The Union stuck with their successful 'Buffalo Horn' attack, with the infantry in the centre and the cavalry and skirmishers on the flanks. Sly T'Lone's Brigade was in the centre and was tasked with advancing up the road, with Gump's Brigade to the left by the wheatfield.


Turn 1
Shirely Wayne and his troops sounded the bugle call and set off at a fair old trot, moving past the woods and dismounting. Sly T'Lone's Brigade failed to move off, but Gump's troops set off through the wheatfields to try and close with the enemy as quickly as possible.

In reply 'Pappy' O'Daniel moved the cavalry to the snake rail fence, where they dismounted and opened fire on Wayne's troops, but only caused one hit. Only the the right flank had a target, but the artillery failed to hit Gump's troops in line in the wheatfield.

Turn 2
Having come under fire, Shirley Waynes decided to split his command, with one unit heading to the cover of the woods whilst the other crossed over the fence and move into the ploughed field from where it could should at the Rebel cavalry. Union skirmishers moved up in support and their combined fire saw one hit on the cavalry and 1st Mississippi, both of which were also Disordered.

Sly T'Lone's Brigade moved forward, with the gun unlimbering. In advance of these the Union skirmishers moved forward and occupied the wooden hut at the road junction. Gump's Brigade failed, but as they were in March Column were allowed a free move and so deployed into line. On the left flank the cavalry managed to move but one failed its command roll.

The Confederate left flank had many units Disordered, so was limited in what it could do, but its shooting saw Wayne's cavalry and skirmishers in the woods Disordered. On the right flank the 2nd Kentucky moved forward to the snake rail fence by the cornfields, ready to meet the expected Union cavalry attack.

Turn 3
A mixed Turn for the Union boys as Sly T'Lone once again fails his command roll and Gump Blunders, leading to his Brigade moving one move to the right. Things went better for Wayne's troops and the skirmishers in the woods, who managed to cause the 1st Mississippi to move back Shaken and Disordered. On the left flank the cavalry moved up ready to engage the 2nd Kentucky.

The 2nd Kentucky duly oblige and cause one hit on the Union cavalry. On the confederate left flank, the cavalry cause two hits on Wayne's troops who duly save them! Not a good outcome for the Rebs. At least the 2nd Mississippi cause the Union skirmishers to go Disordered.


Turn 4
Numbers eventually tell and shooting from Wayne's troops leaves the Confederate cavalry Shaken and Disordered. As Sly T'Lone's Brigade moved forward to the edge of the wheat field, the Union skirmishers who've moved forward to the snake rail fence put more hits on the 1st Mississippi who once agan have to retreat Shaken and Disordered. The 2nd Mississippi also take hits and become Disordered, leaving the Confederate left flank distinctly vulnerable.

Gump seemed determined to snatch defeat from the jaws of victory by once again Blundering, this time leading to his whole Brigade retreating off the table! Might this be the turning point of the battle? Not yet as the Union cavalry on the left flank Disordered the 2nd Kentucky.

With so many units with Disorder, the Rebs options were limited. The 3rd Kentucky were moved up to the sawmill to threaten Sly T'Lone's flank now that Gump's Brigade had disappeared. The Confederate shooting could have been better, managing only to Disorder some of Wayne's troops and the Skirmishers in the log cabin. What they need was troops going Shaken to even things up a bit.


Turn 5
The time was perfect for Wayne to lead his troops in a charge to dislodge the Confederate cavalry, but he failed his command roll. So instead the did an old fashioned shoot out, that led to the Rebs becoming 'Whipped'. Sly T'Lone moved some units towards the Sawmill whilst his next command Blundered, leading to the other units moving off to the right, which was not quite what he had hoped for. Gump and his Brigade reappeared at the edge of the table. With all the moving completed it was a case off shooting all across the line, which was rather effective. As the smoke cleared the 2nd and 3rd Kentucky as well as the 2nd Mississippi all took 2 hits and were Disordered.

Again the Confederate troops could do little other than shoot back which was desultory to say the least, only managing to Disorder one unit of Sly T'Lone's Brigade.

Turn 6
As Wayne failed his command roll, Gump and his Brigade pushed smartly forward. The Union shooting was impressive once again, with the 2nd Mississippi becoming Shaken and Disordered, the 2nd Kentucky Shaken and the 3rd Kentucky 'Whipped'.

With som many units Shaken and 'Whipped', Colonel Sanders command effectively ceased to exist as the troops fled the field of battle, leaving the door wide open to the Shenandoah Valley. 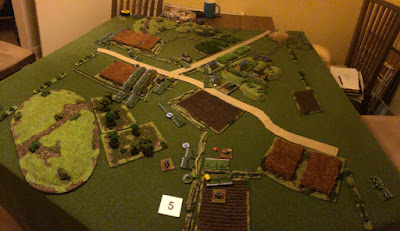 End of Game
In the end the Confederate troops were not enough to put up meaningful resistance against the Union 'hordes'. A few die rolls here or there might have made some difference, but in reality would not have affected the outcome. Still a fun game with its comedy moments which we both enjoyed.

Post Game & Campaign Thoughts
So the campaign has reached the end of its course, so time to reflect upon this and the final game. So as always some thoughts in no particular order: