Witha pretty good handle of the core mechanics of BPII, it was time to move on from our mini-campaign and try some historical actions. The first scenario in the 'Glory Hallelujah!' book looked to be good, so we thought we'd give this a go.
Scenario Amendments
To keep things simple for a mid-week game, we tweaked things a bit, which were as follows:

All other scenario rules were as per the 'Glory Hallelujah!' supplement.
Deployment
With both of us having the option to have troops come on as flanking forces, it was interesting the we both went for them to be on the table at the start and both over Wilson's Creek protecting the flanks of our respective forces.

The Union troops were deployed as follows, with the 1st Brigade on the right flank, moving through the 2nd and 3rd with the 4th Brigade on the left flank over Wilson's Creek.

Turn 1
The Union troops moved first, with the 1st, 2nd and 3rd Brigades all advancing and their guns unlimbering ready to shoot at the Confederate troops. The 4th Brigade failed to move, so the General moved over to the flank to give them some encouragment.

As the firing erupted along the line, the 1st and 2nd Bde's caused hits and Disorder on their opposite numbers, with the 3rd Bde diving their fire across the Confederate 3rd and 4th Bde's, again causing hits and Disorder. A good opening salvo from the Union troops.

A mixed amount of movement from the Confederate troops as the 1st, 5th and 6th Bde's all failed their orders to advance, with the 4th Bde failing their passage of lines roll. Despite this, the shooting was effective, with the 1st and 2nd Bde's combining their fire and cuasing hits and Disorder on the Union 1st Bde. The 3rd and 4th Bde's fire caused hits and Disorder on the Union 2nd and 3rd Bde's. So a good response from the Confederate boys.


Turn 2
Once again the Union 4th Bde failed to move, even with the General in attendance, which was not good news as their presence was needed to help offset the Confederate advantage in numbers. The 1st Bde failed their passage of lines, but the 2nd and 3rd Bde's all succeeded. However their shooting was less effective, but the 2nd Bde did cause one of the Confederate 2nd Bde's units to become 'Whipped'.

The Confederate 6th Cavalry Bde again failed to move, but at least the 5th Bde did start to move towards Wilson's Creek, but only one move. The 1st Bde crossed Skegg's Branch to put pressure on the Union right, but the 2nd and 3rd Bde's failed to move. However the 4th Bde  moved a unit over to cover the hole left by the 'Whipped' 2nd Bde unit.


Turn 3
Finally the Union 4th Bde moved forward to help cover the left flank and their supporting gun caused some hits and Disorder on the Confederate 3rd Bde. With the rest of the Union troops Shaken and or Disordered, some units made a voluntary Disordered Retreat to the rear, to try and give them chance to rally of hits etc. The 3rd Bde failed to cause any hits from its shooting, but at least the 1st and 2nd Bde's did manage to cause some hits and Disorder.

The Confederate 6th Cavalry Bde recovered from its stupor and advanced towards the Union 4th Bde to engage them whilst dismounted. The Confederate 1st and 3rd Bde's advanced to keep up pressure on the Union 1st and 3rd Bde's, whils the 2nd and 4th Bde's held their positions. As fire erupted across the line, the Union 3rd Bde became Broken as did the 1st Bde when a unit became 'Whipped'.

With 2 Broken Bde's, the Union army was now itself Broken and, with no way of offering any meaningful resistance, it quit the field of battle. 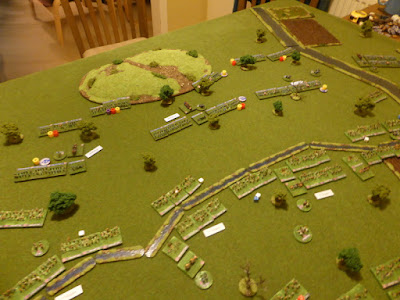 The end came far more quickly than either of us thought possible, with the Union army collapsing in short order in Turn 3. If only the Union 4th Bde had moved forward more quickly iy might have been a different ball game.
Post-Game Thoughts
Well a short and action packed game that led to a very quick and emphatic victory for the Confederacy. At the end of Turn 2 the Union were not in a bad position, so it was a surprise at how things turned out in the following Turn. Still a fun game which we enjoyed and gave up lenty of time for a post-game chat, which is always nice. So as always so thoughts on the game etc:

We're due to have another game this week and I'm going to suggest we try the New Market,
1864 scenario from the 'Glory Hallelujah!' supplement, as the terrain is more open and there is a nice mix of forces to play with. So until next time...