This morning I attended the IPMS Show held in Thornbury, just outside of Bristol. Originally this was just a model show, but over the past few years or so has included a wargames element, organised by Lincombe Barn wargames club. Normally we are away on holiday at this time of year, but having had our annual jaunt away, it was nice to be free to make the short journey to the show to see what was on offer. I always try and support my local shows, as it is a great way of showcasing our hobby as well as being a place to meet up and chat with friends and like minded individuals.

I'll come onto my thoughts on the show later, but first off a rather large selection of 'photos of 'stuff' that caught my eye, annotated where applicable: 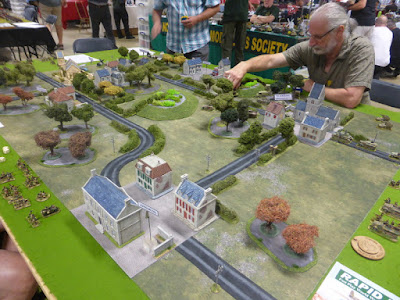 In the end I spent nearly 2 hours at the show, having a good wander around. So what did I think?