Assault on Floridia - Part 2 of an Operation Husky campaign

Following on from last week's game, the situation is as follows:

Despite being unable to meet up with Gruppo Mobile D, Gruppo Tattico Ronco has been ordered to carry on with the planned attack on Floridia. Rather than an operation to breakthrough towards Syracuse, this has now become one of slowing down the British advance by putting in a spoiling attack.

With the successful action against Gruppo Mobile D, the British 13th Brigade is still pushing to the West to protect the British left flank. Expecting an attack around Floridia, it has deployed the 2nd Wiltshires with support from 4th Armoured Brigade.

Scenario Details
The scenario last 8 Turns with the British deploying first using static deployment, the Italians using mobile deployment. The British can start the game dug-in, which counts as 5+ to hit from direct fire, but 4+ from indirect fire. This represents hastily prepared slit trenches as well as the difficulty of digging in the the rocky terrain.

The British lack their organic mortar and ATG support units due to problems getting them off the beaches (more details can be found on Bob Mackenzie's excellent Test of Battle site). Due to the failure to link up with Gruppo Mobile D, the Italian's have been allocated some bomber support, which has been diverted from attacking the ships and beaches.

Deployment
The British deploy in the NW corner, the Italians the SE. The railway track offers no cover nor blocks line-of-sight. The terrain is largely made up of partially walled orchards and open fields. There is a dry river bed (indicated by the curving 'hedges') that is impassable to vehicles and tanks, except via the road. Infantry treat it as a linear obstacle.


Turn 1
The Italian right flank advanced on smartly, whilst the left moved and then Blundered, resulting in the CO being at -2CV for this Turn and the next. Unsurprisingly he failed to arrive, but the FAO and Recce moved onto the table.

For the British there was little immediate threat, so they only advanced their left flank to meet Italians advancing parallel to the road.


Turn 2
This Turn was similar to the last, with both Italian flanks advancing, as did the Recce and FAO. Once again the CO failed to show up.

The British pushed their left flank to the edge of the stream and moved other units only slightly.


Turn 3
At the start of the Turn, the Italian Air Support arrived, hitting and suppressing an awful lot of British units. After they had left, both flanks advanced, but the CO stubbornly remained off table.

Despite having line-of-sight to the Italians, the British FAO failed his command roll, much to their relief. With many units suppressed or already in good positions, the British CO moved his Shermans towards his right flank.

Turn 4
This time it was the Turn of the Italian FAO to fail his command roll. At least the CO finally arrived as both flanks advanced forward.

With no targets available, the British dressed ranks.


Turn 5
A poor Turn for the Italians, with the right flank Blundering, the left failing its command roll and the FAO also failing. At least the CO managed to call up his reserve infantry units and posted them on the right flank.

Again the British simply held their positions until they could acquire targets. 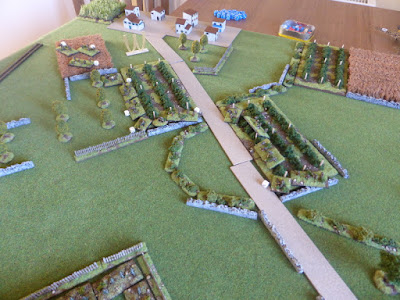 Turn 6
Things got off to a good start for the Italians, with their FAO calling in his 75mm guns onto the British left flank. However the right flank Blundered once again (what are the chances?) but at least the left flank destroyed a British MG unit in an exchange of fire. Just when you needed him, the CO failed his command roll!

The British FAO not to be outdone, calls in his battery of 25pdrs to typically devastating effect. With the Italian FAO rather forward of his lines, the Shermans advance through the orchard and managed to drive him off.

Turn 7
Things started to Turn in favour of the British, as the Italians were unable to do much other than Initiative move some infantry. However the British got off to a flyer, with the FAO once again calling in his artillery right on top of the Italians with the usual mass of suppression. Fire from the left flank and the Shermans saw the loss of 4 infantry units, the Recce unit and an MG unit. This took the Italians close, but not quite to, their break point.


Turn 8
This was do or die time for the Italians if they were to rescue anything from the situation. Luckily it got off to a good start with the FAO calling in his artillery almost on top of himself leading to the loss of 2 British infantry units. With most other units suppressed, the CO manage to activate his reserves to lead to the loss of the remaining British MG unit.


End of Game
The game went right down to the wire and the result could have gone either way. The Italians were a spent force, but the British had suffered lots of hits, so could easily have reached their break Point too in another Turn. A game that got off to a cagey and quiet start, but really came to life in the last 3 Turns. We both enjoyed it immensely and I think that's the first time we have played right to the end.

Post Game Thoughts
As always, some thoughts on the game, the campaign and the rules in no particular order:

In campaign terms, the Italians achieved there objective of a spoiling attack and certainly gave the British a bloody nose in the process. So much so that the British advance has been slowed down somewhat, allowing the Italians time to form a better defensive line than planned. The German Kampfgruppe Schmaltz may make an appearance, but I'm not sure yet as I'm still working on the next scenario. One thing for certain is that the British are now on the attack and the Italians the back foot. How much support the British can expect is, again, being worked out, but they will have Air Superiority now and can expect support as such. So until next time...
Posted by Steve J. at 07:47

Email ThisBlogThis!Share to TwitterShare to FacebookShare to Pinterest
Labels: BKCIV