The Battle of Isted/Idstedt, 1st Schleswig-Holstein War 1850 - a BBB AAR

After some interesting and entertaining games set during the fictional Prussian invasion of England, this week saw us return to some 'proper' historical gaming in the form of the the Battle of Isted from the 1st Schleswig-Holstein War 1848 - 1850. Now most of us probably only know of this war due to Palmerston's purported quote on the Schleswig-Holstein issue:

“Only three people have ever really understood the Schleswig-Holstein business—the Prince Consort, who is dead—a German professor, who has gone mad—and I, who have forgotten all about it."

Not a famous conflict by any means, as the 2nd Schleswig-Holstein War is, generally speaking, better known. I think this is a shame, as both conlficts have a lot to recommend them, but not if you are the authors of the 'Black Powder' ruleset:

"We pass over the early wars of German unification without much feeling of regret - the Schleswig War (Denmark versus Prussia) and Second Schleswig War (this time with added Austrians) are not without their supporters, but whether we would want to encourage them is another matter."

I am firmly a supporter of both conflicts, so do not agree with the above quote.

Enough of the background 'history' and on with the game. Once again 'Bloody Big Battles' was to be our chosen ruleset and full details of the scenario can be found in the BBB Yahoo Group file . Broadly speaking both sides are evenly matched, with "the Danes having numbers and more active troops against the Schleswig-Holsteiners with better equipment and a strong position."

The map of the game can be found below, with the only change being that I lost the top and bottom sections to allow me to fit everything onto out standard 4' x 4' table. The Schleswig-Holstein forces are in Blue with the Danes in red. 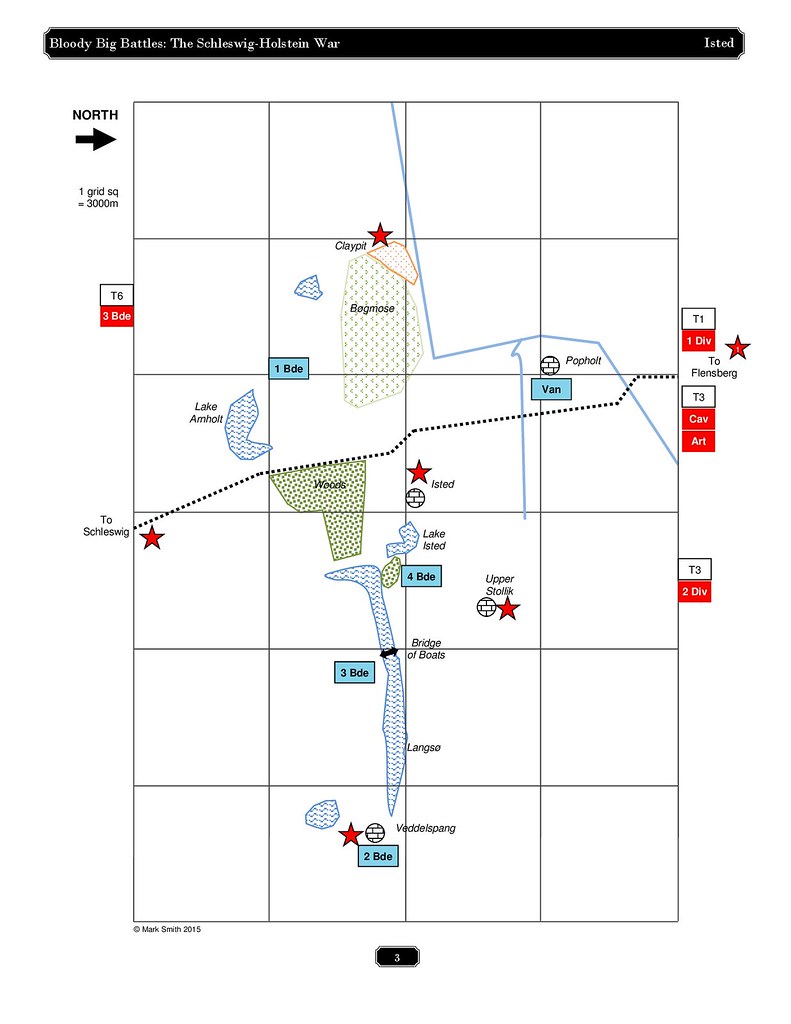 I chose to be the Danes, mainly because of watching and enjoying a lot of Scandinavian dramas on the BBC, which in my book is as good a reason as any. Once again no notes were taken during the game as it was full of action from start to finish. Hopefully I can remember most of what happened, but it is a few days since the game so my memory may play tricks with me...

Sadly at this point time defeated us and I completely forgot to take photos of the final Turn!!! However looking at the situation we agreed that the Danish troops were in a better position and had gained a minor victory of the Schleswig-Holstein forces.

Post Game Thoughts
Well what a game that was! It lasted over 3 hours and was full of action from the first to the last Turn. In fact I can safely say that was the best game we have had with Bloody Big Battles and all credit to Mark Smith for coming up with such a great scenario. Given that so much happened during the game, I'll try to comment on the salient points that we talked about during and after the game:

So, next week we are sticking with something a bit 'left field' and gaming 'The Battle of Tapio-Bickse 1849' from the Hungarian War of Independence, which is not something you see gamed every day...