Following on from our previous ACW game a few weeks ago, this week was the turn of the first day of the Battle of Shiloh. This promised to be a very different type of game, with a quite narrow battlefield combined with most of it being wooded, naturally limiting visibility and hampering movement. Once again Dave took on the role of the Confederates whilst I the Union.

As before I will not dwell on the details of the scenario as there is so much detail to be had via the internet. The map from the BBB Yahoo Group should suffice to give a good idea of the table layout and initial deployment of forces. 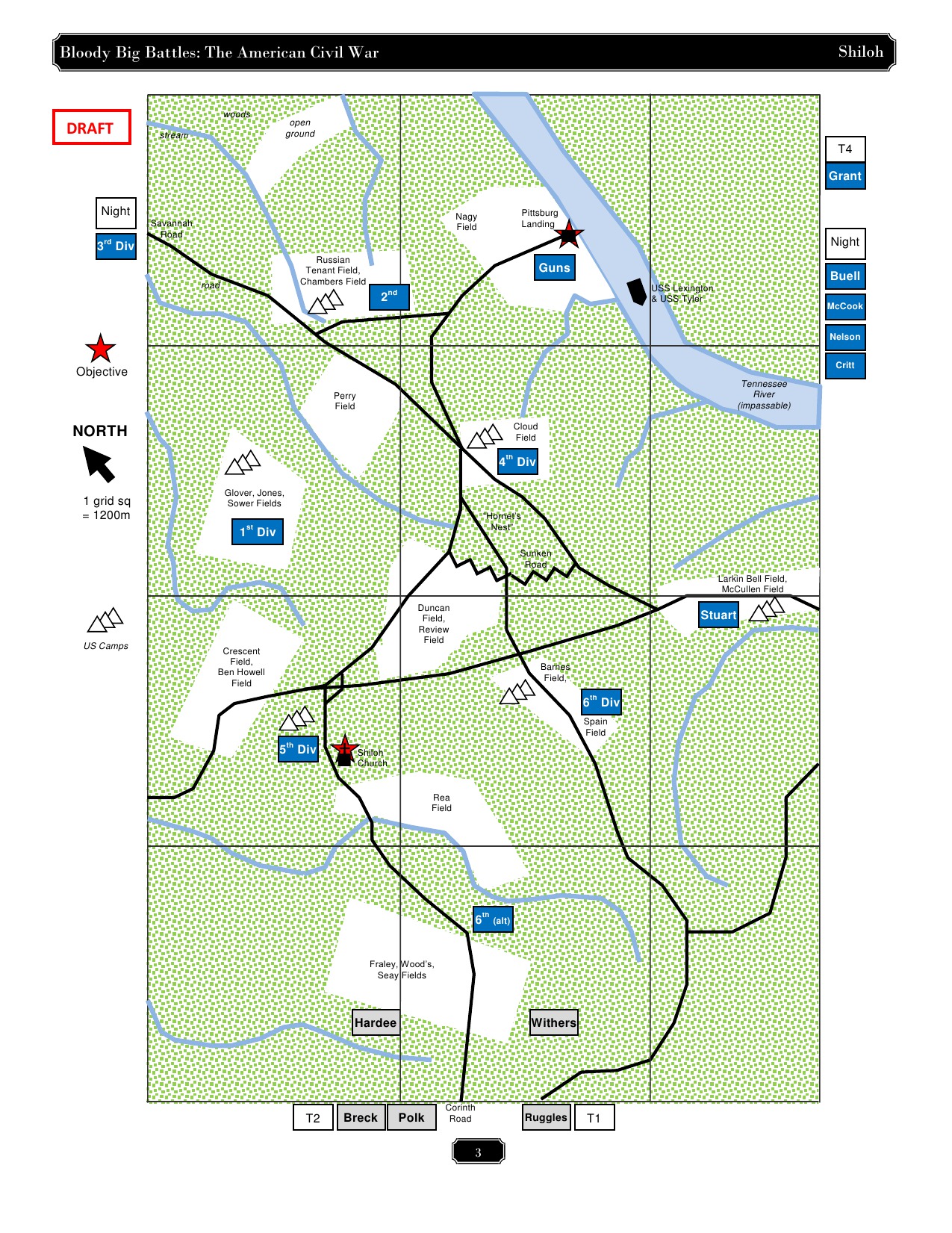 Table Set Up & Deployment
The table was layed out as close to the map as possible, given the limitations of my felt roads and rivers. The fields were the only open areas, with the rest of the table being wooded. The Union player has an option to deploy Prentiss' 6th Division further forward than their historical deployment. After some thought I chose the historical option as it fitted in with my plan of trying to form a defense in depth, with successive lines of troops to try and hold off the Confederates for as long as possible.

The Game
As this was a somewhat unusual scenario that required quite a bit of concentration due to the terrain and dispersed nature of the Union forces at the start, I did not have time to make any notes. Hopefully the pics will jog my memory so that I can give a good account of how the battle unfolded. So without further ado...


At this point we simply ran out of time. Having played for nearly 3 hours and with another 3 odd Turns still left to play, we called it a day and a draw.

Post Game Thoughts
So this was certainly a very different, challenging and yet still very enjoyable game of BBB. One that certainly got the grey cells working and gave us plenty of things to talk about as the game unfolded. So as always a bit of a post game critique:

So next week we may play out day Two or may move onto another scenario entirely. Dave should be bringing along a colleague who is putting together 2mm forces for BBB, so it will be good to meet him and hopefully see his figures in the flesh as it were. I've tried 2mm before but it never really grabbed me. 6mm is as small as I'm likely to go for my games, with 10mm still my preferred option. However 6mm really does work for this game.
Posted by Steve J. at 12:58