For our first game of the New Year, it was once again Bloody Big Battles, pretty much starting off where we had finished off before the Xmas break. As planned it would be the Montebello training scenario from the BBB Yahoo Group files. Dave would take the role of the Allies whilst I would be the Austrians.

Set Up
The table was set up pretty much as per the map shown below, but without the villages shown at the top. The Austrians would deploy first followed by the allies, who would take the first Turn. 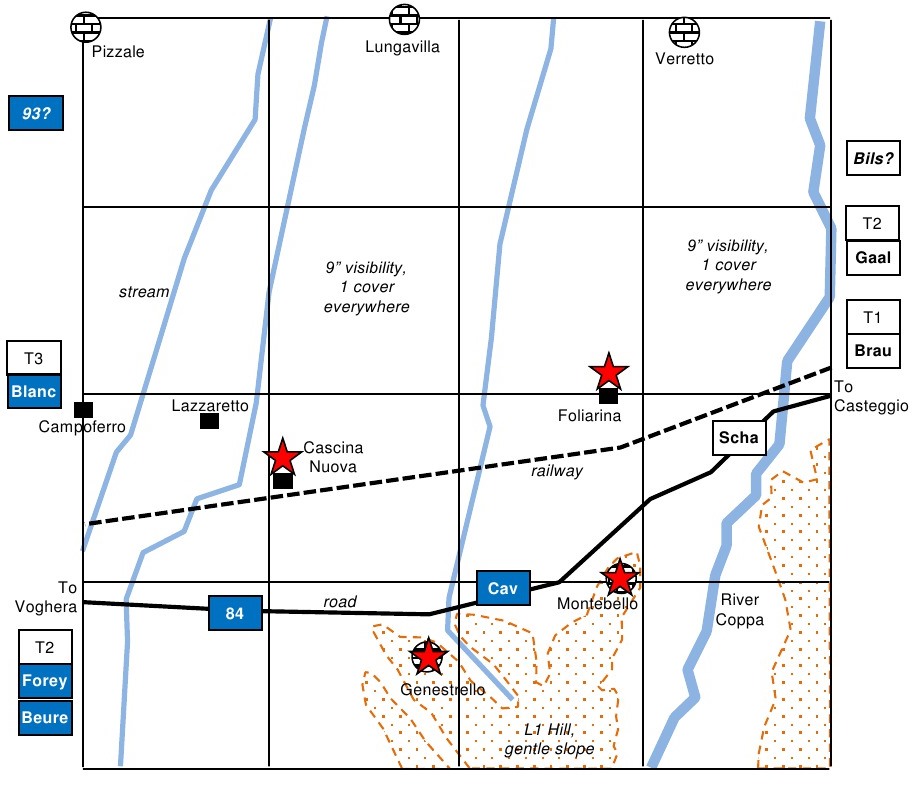 Turn 1
With the troops deployed as per the scenario restrictions, it was time to commence hostilities. It was imperative for Dave to be agressive to try and prevent the early arrival of the Austrian re-inforcements. To this end the Sardinian cavalry charged straight into the head of Schaffgottsch Brigade which were deployed in column of march, only to be defeated in close combat. However they had achieved their aim. The Austrians tried to move out of their bridgehead over the River Coppa, whilst the head of the Brigade attacked the French 84th Line, but to little effect.


Turn 2
Beuret's 1st Brigade arrived, accompanied by General Foret and quickly advanced along the Voghera road towards Genestrello. Once again the French troops were agressive and managed to force Schaffgottsch's Brigade back. As Brigade Baum had failed to move whilst still in column, this caused all sorts of problems in and around the bridgehead. Due to this blockage, Gaal's Brigade had to deploy over the railway line to try and gain room to manouevre.


Turn 3
The French are in full flow as General Blanchard arrives with his 2nd Brigade, but the terrain will hamper the movement. General Beuret and his 1st Brigade seizes control of Montebello whilst the Austrians are in disarray as a result of the 84th Line catching Braum's Brigade in column of march, forcing them back over the bridge. With things looking pretty bad for the Austrian's, Bils Brigade arrives and moves as quickly as it can towards the sound of gunfire.

Post Game Thoughts
Well yet another very enjoyable game of BBB, despite such an overwhelming French win. Even thought it appeared very onesided, there were a couple of points during the game that could have turned it in the Austrians favour. So a few thoughts on the game and scenario:

The next game is going to be 1st Bull Run from the American Civil War, but cut down slightly for our 4'x4' table which is perfect for an evenings gaming. Dave will be bringing his 6mm troops on 1"x1" bases, so we are both looking forward to seeing how these play, both from a gaming perspective but also a visual one.