As some of you may know, my regular gaming partner and chum Craig, is putting together a couple of variants of Dux Bellorum for the Medieval period, namely Star&Garter for the Hundred Years War and more recently, The Crescent&The Cross for the First Crusade. The Medieval period has been an area of interest for me as long as I can remember, probably started by a Crusader plastic toy the my Grandmother won at Bingo in the late '60s. So with Craig toiling away at his rules and some Xmas money burning a hole in my pocket, I thought I would re-visit my intention of collecting two Armies for use with Craig's rules.

And then the inevitable happened with an "Ooh shiny lead" moment in the form of Dalauppror's Hail Caeser AAR on the 13thC Baltic Crusades. I knew a little of this period as I used to have an Osprey book on the battle of Lake Peipus, bought purely on the basis of the Angus McBride illustrations, plus my general interest in the aforementioned Medieval period. 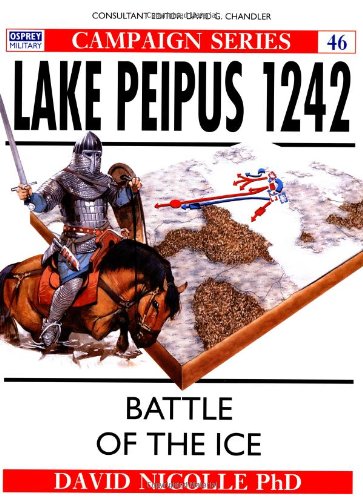 Further reading of Michael's Baltic Crusades articles on his Blog convinced me to give this period a go using the Dux Bellorum rules as a starting point. Afterall the period in questions arms and armour and general tactics seemed to fit in nicely with the period covered by Dux Bellorum, but with the odd tweak here and there required.

Now although the Teutonic Orders in the Baltic are generally well known, I wanted to go for Danish and Swedish Crusaders versus the Pagan Baltic tribes and the Russians of Novgorod. Maybe watching 'The Killing', 'Borgen' and 'The Bridge' have had an effect on me without knowing it. Certainly the Swedes and Danes would be much more colourful on the table compared to the monochromatic Teutons.

As a starting point, I will be perusing the following Osprey book to get an overview of the conflict:

Other essential reading material includes the following, with the first two being the most relevant:

As per my other Dux Bellorum armies, the figures I use will be from Pendraken, a mix from their Anglo-Saxon, Norse, Norman and Early Medieval ranges. There will be a samttering of others from their late Medieval and possibly forthcoming Mongol ranges. My intention is to still collect two armies for Craig's rules, but my current attention is on sorting out two colourful and interesting armies for this rather neglected period of history. Watch this space for more updates.