My wargaming has been extremely limited of late, but this is fairly normal for this time of year, as with the long summer evenings I prefer to spend as much time out of doors as I can, given that I'm cooped up in a workshop for most of the working week. Also I just haven't been in the mood to do any painting of late, largely due to the reasons outlined above.
However with an iffy weekend forecast on the weather front and with the Muse not upon me on the painting front, I thought I'd try and get a solo game in. So it was then a case of what to play? Given that I would have limited time for the game (see below for more on this) I settled for BKCII. With this sorted it was onto what period?
Now for many years I have been interested in wargaming Operation Seelowe, in large part due to these Airfix magazine articles as well as the excellent "Invasion" by Kenneth Macksey. 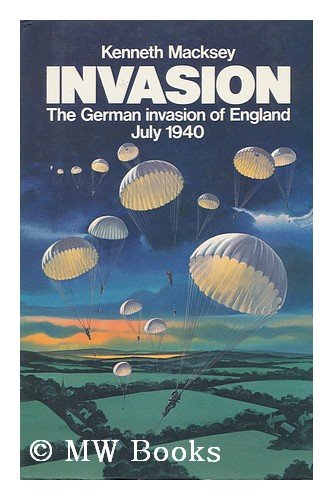 My problem has always been not having the right forces painted up to game this 'what if?' period of WWII. Now I'm not one to let such trifling issues get in the way, so I set about figuring out what forces I could cobble together for an 'Operation Seelowe' inspired game. Having recently finished Skymen by Robert Kershaw, my mind turned to whether or not I could use my Italian troops for this, as there was some interesting information on the early Italian attempts at creating paratroopers in Libya. The more I thought about this the more I liked the idea of Italian troops taking part in the Axis invasion of Britain in the summer of 1940, so I quickly set about coming up with some background fluff for the scenario.

The British Expeditionary Force has been destroyed at Dunkirk, leaving Britain open to invasion. However the cost to the Wehrmacht is high and the continued operations in Southern France have further reduced the combat effectiveness of the German forces. To mount 'Operation Seelowe' effectively, outside help is required. Despite many reservations from the German high command, they have been 'forced' to accept Italian offers of assistance, in large part due to Hitlers personal intervention on behalf of his old friend Mussolini.

As King Cnut proved on the coast of East Anglia, the tide waits for no man and with weather conditions in the English Channel variable to say the least, the Axis forces have a limited window of opportunity to mount an invasion before the weather starts to turn in late summer. So a modified plan of attack including Italian assistance is presented to the Fuhrer, who finally gives his seal of approval.

After the success of the German 22nd Luftlande Division in Holland, Mussolini ordered that an Italian equivalent be created. This led to the formation of the IX 'Falcone'  Divisione Ariasbarco, formed from existing Italian infantry divisions. Training was rudimentary to say the least but the Division was ready for action by the end of May, no mean feat given the short time avaialbe to them.

The Italian forces consisted of:
2 Battalions each of:
Support was provided by:
British Forces

With the loss of the BEF on the Dunkirk beaches, the defence of Britain, and England in particular, fell on the shoulders of the few regular Divisions left, but largely on those of the first line Terratorial Army units based in and around London and the South East.

The 5th Battalion, the Royal Sussex Regiment, was one such unit and had been deployed on the Eastern edge of the South Downs, to guard the approaches to London. The Battalion was supported by elements of the 65th Field Artillery Regiment, with attached elements of the Westminster Dragoons as a rapid reaction force.

Well not wishing to over complicate things I went with pretty much as straight forward Scenario 11. Airborne Assault from the rulebook. In keeping with my ideas for the action I decided to deploy only 1 Company on the objective with an MG unit in the pillbox and with an HQ and FAO also deployed. The other units would be held in reserve and come onto the table from one of the 4 roads on a random die roll.

For the Italian units they would deploy as per the scenario, rather than using the more fun dropping marked bits of paper onto the table route. This was simply to help speed things up, but I do prefer the dropped paper route as it does produce a nice random element to the deployment.

The British units deployed in an all round defensive posture on the bridge, with barbed wire deployed to the South to face the expected route of a land based attack.

The Italian airborne assault was preceded by targeted dive bomber attacks by the Luftwaffe. The Henschel HS 123 attacks succeeded in supressing the British command  and mortar unit in the defensive cordon. Following on behind the Ju-52s arrived and dropped their cargo with admirable accuracy North and South of the river.

The Italian 1st Battalion landed in and around Pratt's Folly, with the main assault team quickly setting off towards the bridge. The support team was a bit slow off the mark but did manage to assemble their ATG and mortar.

The Italian 3rd Battalion landed to the West of Pratt's Bottom, again with the assault team quickly moving into action, with them suppressing the British troops South of the bridge and setting up a flanking manouevre into the village. The support team was a bit disorganised having landed in and around the wood to the South West of the village.

With the HQ unit still reeling from the dive bomber attack, there was not a lot the British could do at the bridge. The FAO failed to make contact with his Field Artillery battery, so it was now a case of awaiting the arrival of the rest of the Battalion and the Westminster Dragoons.

The die was rolled and they were to arrive on the road at the Southern end of the table. The Battalion HQ failed but the CO arrived with the Vickers light tanks, which proceeded to advance with all speed towards the sound of gunfire. They caught the Italian ATG in the open and proceded to suppress it with a hail of MG fire, giving them a real edge as the Italian troops had no AT rifles.

Suprised by the speedy arrival of the British armour, the 3rd Battalions' support team moves into cover of the woods where possible. Meanwhile the 3rd Battalion assault team ignores the threat to their rear and conrinues to attack the British, finishing off the dug-in infantry unit South of the river.

The 1st Battalion has an attack of the nerves, with both HQs failing to get their orders through. However the CO steps in and things soon get moving with both the assault and support teams moving into position for the attack.

The Westminster Dragoons initiative fire into the Italian ATG, quickly finishing it off, which is a major blow for the Italians. However the Battalion reinforcements fail to show up again, so there is little progress on this front.

Things hot up at the bridge, despite the FAO once again failing to get through. However combined fire from the infantry and mortar and pillbox see an MG unit nearly destroyed and an infantry unit suppressed in the village.

In a suprise move, the Italian support team sends an infantry unit to assault the Westminster Dragoons. Blind to the attack on their right flank, the tank succumbs to the assault and the Italian infantry retreat into the woods before the British really know what has hit them. Unfortunately the HQ fails to capitalise on this show of bravado, leaving things precariously balanced. The 3rd Battalion assault team rashly advance, only to be suppressed by MG fire from the pillbox.

The 1st Battalion starts to get a bit edgy at the prospect of attacking the dug-in British, despite overwhelmingly superior numbers and fire power. The CO has to step in once again, but hits have started to mount on the British mortar team.

Once gain the British FAO fails, as does the HQ at the bridge, despite operating from his command post. However things look up on the other front with the arrival of the Battalion reinforcements, who advance with all speed towards the woods and the Italian infantry. The Vickers light tanks fire into said woods, but fail to hit anything, most likely blinded by the smoke from their burning comrades tank. The infantry attached to the CO have better luck, causing hits on the Italians but taking hits in return.

The 1st Battalion support team initiative assaults the British mortar, who only succumb to the inevitable after two turns of close combat. The rest of the Battalion pours fire into the British position, but to no effect.

The 3rd Battalion assault team wisely decidedes that discretion is the better part of valour and startsd to move back from assaulting the bridge. With the threat to their rear increasing, they decided to leave it to the 1st Battalion to take the objective. The firefight in the woods by the support team continues, but again to little effect.

The British FAO finally manages to get through to his Field Battery of 18pdrs, but the rounds deviate, only managing to supress the 3rd Battalion assault team HQ and one infantry unit. There is no action at the bridge, but the Battalion reinforcements continue their advance towards the edge of the cornfield, so as to be in a position to support the Westminster Dragoons. The infantry and Westminster Dragoons pour fire into the wood, finishing off one infantry unit and supressing two others.
End of Game

By the end of Turn 4 it was obvious that the game was all but up for the British. It was only a matter of time before the Italians would overwhelm the defences at the bridge, giving them the objective and the game. Even if I had decided to carry on, the British forces would not be strong enough to clear the Italian 3rd Battalion from in and around Pratt's Bottom, despite having armoured support, talk less of moving on to re-take the bridge. So I wisely called it a day and gave victory to the Italians.

I was suprised at how quickly the game turned in favour of the Italians. To be honest I thought they would have a tough job gaining the objective. So why did the Italians win so quickly? Well a few thoughts below might explain things:
Well I learnt a lot from this scenario, as it's the first time I've played this. I will take the lessons outlined above for the next time I attempt an airborne assault. You live and learn as they say.

As an aside to the game itself, I have often wondered why I simply don't get more games in, whether solo or with my friends. I thought about this as I was setting up the game, and so have jotted down a few thoughts below:
So all I really need to do to overcome the issues outlined above is to get myself a dedicated games room. Now how do I broach the subject with SWMBO ...?
Posted by Steve J. at 08:47